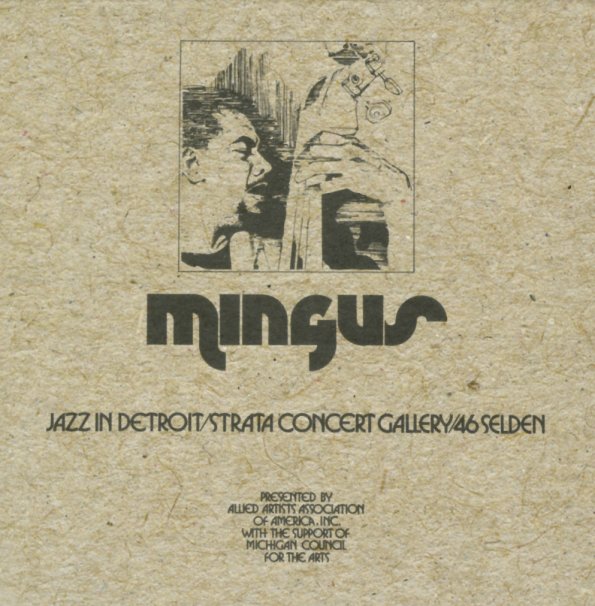 A fantastic live performance from Charles Mingus – recorded in Detroit, with a slightly unusual group – and done with the more open, freewheeling quality that grace his live recordings of the early 60s! The set was recorded at the Strata Gallery – and has some of the deeper spiritual currents of the work on Detroit's Strata label – as the quintet burns beautifully with contributions from Don Pullen on piano, John Stubblefield on tenor, Joe Gardner on trumpet, and the great Roy Brooks on drums! It's interesting both to hear Mingus without Dannie Richmond on drums – and Brooks at a time when he was at his most righteous – and the pairing really seems to bring a lot of the best energy out of the other players too. The super-expanded set features material from a few nights of performance, with a few alternate takes – and titles include "The Man Who Never Sleeps", "Pithecanthropus Erectus", "Peggy's Blue Skylight", "Orange Was The Color Of Her Dress Then Blue Silk", "Dizzy Profile", and "C Jam Blues".  © 1996-2023, Dusty Groove, Inc.

Reincarnation Of A Love Bird (Candid)
Candid/Ultra Vybe (Japan), 1960. New Copy
CD...$12.99 16.99
A great counterpart to the two famous Charles Mingus albums for the Candid label – really a third "lost" Candid album, recorded at the time of those sets, but never issued until many years later! As with those great dates, the work here is filled with righteous anger, unbridled ... CD

Mingus (Candid)
Candid/Ultra Vybe (Japan), 1960. New Copy
CD...$12.99 16.99 (CD...$7.99)
One of Charles Mingus' classic recordings for the Candid label – far and away some of the best recordings he ever made, and some of the few studio sessions that really let him stretch out and do his thing! The Candid label didn't last long – but during their short stretch of recording, ... CD

Charles Mingus Presents Charles Mingus (with bonus tracks)
Candid/Ultra Vybe (Japan), 1960. New Copy
CD...$12.99 16.99
The title's an apt one, because after frustrations experienced working for Columbia and other labels, Mingus is finally allowed the freedom here to present his own ideas in all their unfettered glory – working with a bracingly tight quartet that features Eric Dolphy on alto and bass clarinet ... CD

Great Concert Of Charles Mingus
America/Universal (France), 1964. New Copy 2CD
CD...$12.99 24.99
Charles Mingus recorded many great concerts over the years – but this huge double-length collection may well be one of the most likely to earn the title of "great" – as the lineup is superb, and the music really captures Mingus at a time when he was setting a new fire in his ... CD