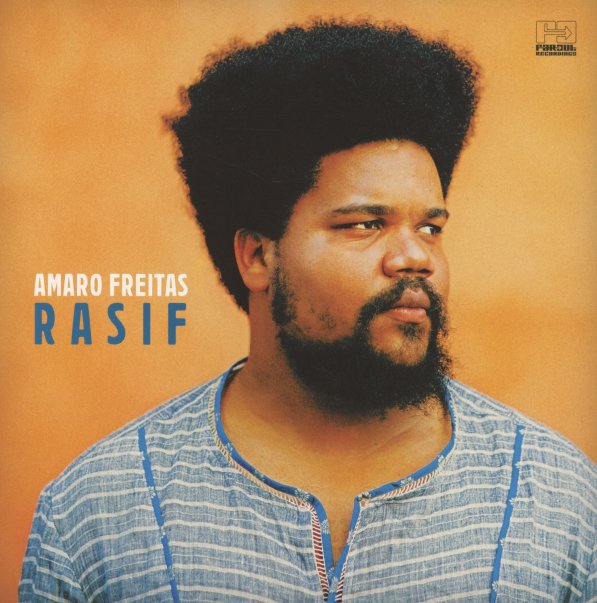 A whole new flavor of Brazilian jazz – served up by pianist Amaro Freitas, whose work on the Pernambuco scene is a great cross-crossing of modes! Freitas has all the fluid, modern elements of some of the better-known Brazilian pianists from Rio and Sao Paulo – but he also mixes in some rootsier elements to his music – still using conventional jazz instrumentation, but with lots of complexity in the rhythms – so much so, it's really hard to put an sort of easy label on his approach! The work of bassist Jean Elton and drummer Hugo Medeiros is equally great – and the trio cascade together in a way that we can't imagine any other group matching at all. A few tracks feature sax and flute from Henrique Albino – but the core trio dominates in a mighty nice way – on titles that include "Aurora", "Mantra", "Rasif", "Afrocatu", "Vitrais", "Dona Eni", and "Trupe".  © 1996-2021, Dusty Groove, Inc.

Sangue Negro
Amaro (Brazil), 2016. New Copy
CD...$22.99
The first album from Brazilian pianist Amaro Freitas – an artist who's gotten greater exposure in the world through albums on the Far Out label, but who already sounds pretty darn wonderful here at the start! As with those records, Freitas has a very rhythmic approach a way of working with ... CD

On The Spur Of The Moment
Blue Note (Japan), 1961. New Copy
CD...$13.99
A darkly-grooving killer from pianist Horace Parlan – and one of our favorite Blue Note albums ever! Although Parlan's always a great player on other sides for the label, this album has him stepping out with an extra edge that's really amazing – working with brothers Tommy and Stanley ... CD