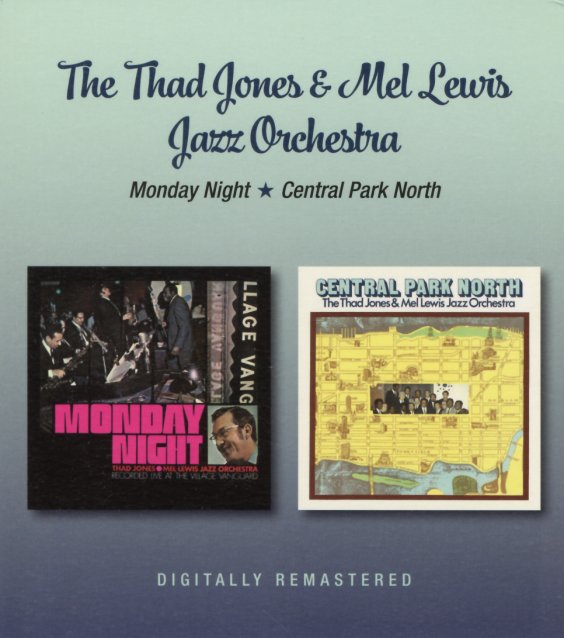 Two early albums from this hip late 60s ensemble! Monday Night is genius work from the Jones & Lewis group – easily one of their best albums! If you've ever wondered why these guys got the chance to make so many records, check out this excellent early set and hear them at their finest. The group's a kick-ass one – with a host of all-star players like Jerome Richardson, Jerry Dodgion, Eddy Daniels, Seldon Powell, Roland Hanna, Richard Davis, and of course Jones and Lewis themselves – and the overall groove is similar to the Clarke-Boland Big Band at their best. Lots of rolling riffing rhythms, and breakout solos that really respect the members of the group – and which light a fuse under nearly every track. Features the funky groover "Mornin Reverend", plus "The Waltz You Swang For Me", "Say It Softly", "The Second Race", and "Kids Are Pretty People". Central Park North is excellent work from the team of Thad Jones and Mel Lewis – arguably one of their best albums from the late 60s, and a set that's got some really great funky big band numbers! There's a nice bouncing groove to the group that they normally don't have – possibly because Richard Davis is playing some Fender bass on the set, which brings in a nice focus on the bottom end – and the best numbers have a sock-soul feel that's in the best late 60s large group soul jazz mode! Titles include "Tow Away Zone", "Jive Samba", "The Groove Merchant", and "Central Park North".  © 1996-2020, Dusty Groove, Inc.