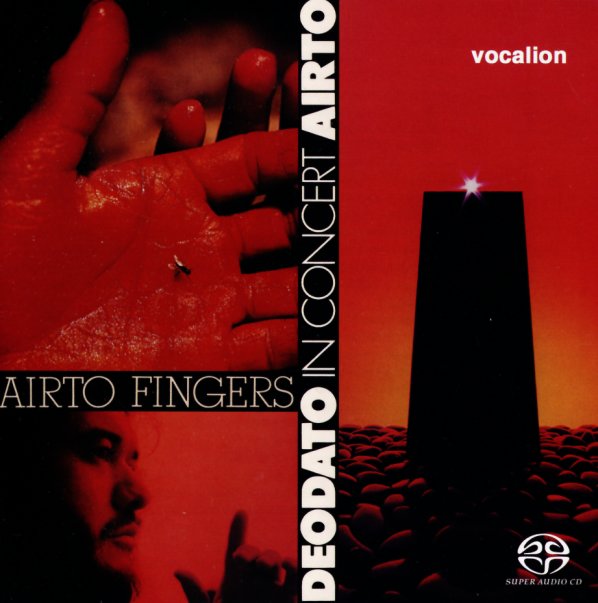 CTI Records meets that Brazilian fusion sound of the 70s – served up here on two classic albums! Fingers is one of Airto's greatest records ever – a really hard hitting batch of tracks that mix sharp-edged fusion lines with some earthier Brazilian percussion touches – all in a way that nicely steps off of Airto's first few American releases, and warms the groove up with a nice dose of California soul! Flora Purim joins in here on both vocals and percussion – and the rest of the group features Hugo Fattoruso on keyboards and harmonica, Jorgte Fattoruso on drums, and David Amaro on both electric and acoustic guitars – shifting nicely between both instruments in a way that further underscores the blended vibe of the record! Most of these tracks are Airto classics – like "Tombo in 7/4", "San Francisco River", "Romance Of Death", "Ringers", and "Wind Chant" – and the record has a very sweet CTI production style, but is still rough enough around the edges to keep things nice and real! Deodato In Concert is an excellent little live set from Deodato – hard to believe because the sound's just as tight and funky as his studio albums, and possibly even more interesting because he manages to pull it off equally well in a live setting! The record features percussion by Airto, guitar by John Tropea, and vocals by Flora Purim – and those are just the marquee names of a large and amazing grew of great musicians! All tracks are long and complicated, for very hynotic feel throughout. The funkiest number is "Tropea", which has a nice long 8 minute groove – and the set also features a cover of Steely Dan's "Do It Again", plus the tracks "Parana", "Branches", "Baubles, Bangles And Beads" and "Skyscraper". Amazing!  © 1996-2020, Dusty Groove, Inc.
(Hybrid Super Audio CD pressing – also works on standard CD players!)