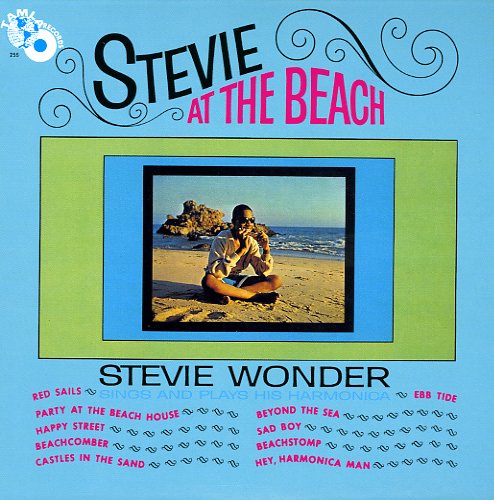 Stevie At The Beach

Almost a precursor of California Motown in the 70s – given that the young Stevie Wonder spends a day at the beach! The set's an unusual one for Wonder, but a great one too – filled with beach-themed tunes to cash in on Stevie's appearance in Muscle Beach Party – but handled in ways that ring out with all his early Motown charm! Wonder's still doing a fair bit of instrumentation here – harmonica, and percussion too – and although there's a fair bit of strings in the backings, they're used in these cool cascading ways that almost replicate the feel of the surf. Titles include the single "Castles In The Sand", in both vocal and instrumental versions – plus "Happy Street", "Beachstomp", "The Party At The Beach House", "The Beachcomber", "Hey Harmonica Man", "Ebb Tide", and "Beyond The Sea".  © 1996-2021, Dusty Groove, Inc.
(Original 2 globes pressing. Cover has a bumped bottom corner, otherwise great shape!)