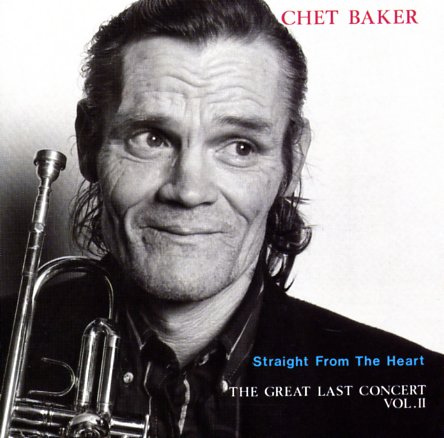 Straight From The Heart – The Great Last Concert Vol 2

Material from the last concert Chet Baker ever recorded – a surprisingly tight session that has the trumpeter blowing solos in front of the NDR Big Band. The setting is relatively relaxed – not a blasting big band session, but one that colors in the space between Baker's notes with gentle shades of sound – really respecting his role as a soloist, and providing just the right amount of gentle accompaniment to flesh out the sound of the set. Chet sings on 2 numbers – "My Funny Valentine" and "I Get Along Without You Very Well" – and other tracks include "Sippin At Bells", "Conception", "Look For The Silver Lining", and "Tenderly". Herb Geller also solos on 2 numbers too!  © 1996-2021, Dusty Groove, Inc.

Long As You're Living
Enja (Germany), 1960. Used
CD...$6.99
Seminal work by drummer Max Roach – recorded in 1960, at the time when he was leading one of his best groups ever! The material was recorded live in Germany with a quintet that includes Tommy Turrentine on trumpet, Stanley Turrentine on tenor, and Julian Priester on trombone – and the ... CD