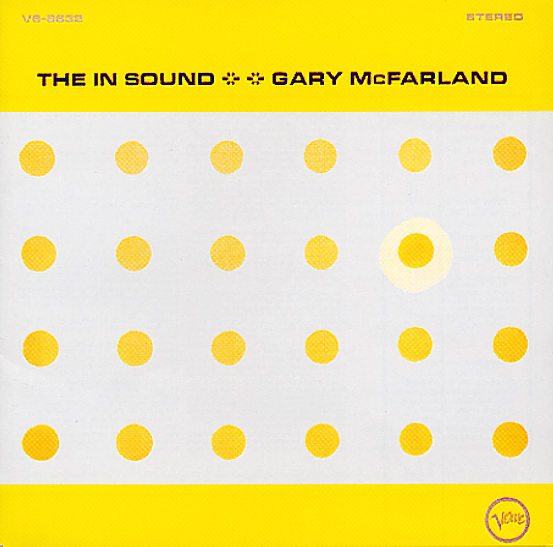 A pair of fantastic albums from vibes master and genius arranger Gary McFarland – back to back on a single CD! First up is The In Sound – one of the grooviest albums of the 60s – a sublime blend of jazz, bossa, and easy – and a set that definitely lives up to its title! The album's probably the most perfect realization of the unique groove that Gary McFarland was going for back in the day – a mix of vibes, whistling, and wordless vocals, supported by some gently funky rhythms that use a fair bit of electric bass to underscore the groove! The lineup here is wonderful – with Bob Brookmeyer on trombone, Gabor Szabo on guitar, Grady Tate on drums, and Sadao Watanabe making a rare 60s US appearance on flute and tenor sax. Gary blends these instrumental elements perfectly for the record – and comes up with a completely unique sound that can only be described as "McFarlandy"! Amazing cuts include "Fried Bananas", "Bloop Bleep", and "Over Easy" – but the whole album's incredible, and other tracks include "The Sting Of The Bee", "Wine & Bread", "Here I Am", "The Hills Of Verdugo", and "The Moment Of Truth". Soft Samba is a dream of a record from Gary McFarland – lightly jazzy instrumentals with a warm bossa nova undercurrent! The style is incredible – a sweet blend of vibes, guitar, and even some light whistling – often also featuring wordless jazz vocals – scatting along with the groove in a melodic and lovely kind of way! The whole thing's incredibly charming, and even familiar tunes come across sounding quite different in McFarlands hands. Titles include "From Russia With Love", "More", "Emily", "La Vie En Rose", "The Love Goddess", and even a groovy take on "I Want To Hold Your Hand". For you true swingers, the cover includes directions for mixing a "Soft Samba Cocktail" (courtesy Spanish Sherry Institute)!  © 1996-2022, Dusty Groove, Inc.

Amazing Toshiko Akiyoshi (SHMCD pressing)
Verve (Japan), 1953/1957. New Copy
CD...$16.99 19.99
An early Verve album by Japanese pianist Toshiko Akioshi – recorded during her 50s years in the US, with a heavy boppish sound that's quite different than her later work! At the time, Toshiko was a strong disciple of Bud Powell – and there's a lot of Powell's fluid frenetic playing in ... CD