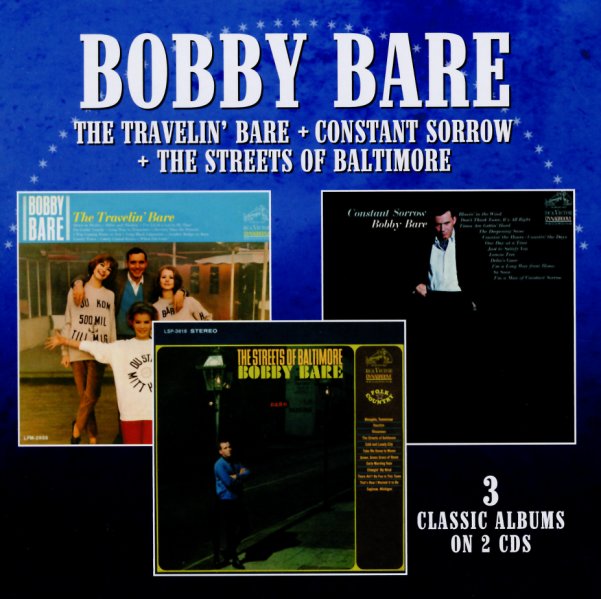 A trio of early records from the great Bobby Bare – presented here in one 2CD set! First up is The Travelin Bare – on which the young Bobby Bare hits the road – taking on a whole host of travel-themed tunes on this gem of a record from 1964 – and although the approach is maybe a bit different than Bare's classics of the 70s, that amazing vocal approach can't help but make every song sound great! In other words, what should be a gimmicky set turns out to be a surprisingly strong vehicle for Bobby's talents – which really soar out, even amidst the full productions laid down by Chet Atkins – heartbreaking vocals on tunes that include "Long Way To Tennessee", "Down In Mexico", "Sittin & Thinkin", "Lonely Town", "I Was Coming Home To You", "Long Black Limousine", and "When I'm Gone". Constant Sorrow is an album that's a bit young in the career of Bobby Bare, but which already shows the singer taking on some of the newer, fresher modes that would make him a giant in the 70s – including some inspirations from folk music that really set the album apart from some of RCA's more pop-country material of the time! Bare's got this way of singing that's wonderful right from the start – heartbreaking even when he's sounding strong – and deeply personal, even in a way that some of the more serious folk singers of his generation couldn't hope to touch. Bobby mixes up country and folk tunes here, all with that classic RCA 60s production – on titles that include "Delia's Gone", "Don't Think Twice It's All Right", "Just To Satisfy You", "The Deepening Snow", "Times Are Gettin Hard", "I'm A Man Of Constant Sorrow", and "Countin The Hours Countin The Days". Streets Of Baltimore is a record that gave Bobby Bare one of his first great songs with the famous title track – but which also really opens up with pure greatness all the way through – showing a maturity in Bare's voice that's a real change from his music of a few years before! The album's got one of those RCA formulas to the song selection – most are city-based numbers, set around the US – but the approach also gives Bobby some great tunes to work with, especially the kind of double-edged lyrics that always opened up his sense of wit mixed with melancholy. In addition to the classic reading of "Streets Of Baltimore", other tunes include "Houston", "Memphis Tennessee", "Vincennes", "Cold & Lonely City", and "There Ain't No Fun In This Town".  © 1996-2023, Dusty Groove, Inc.