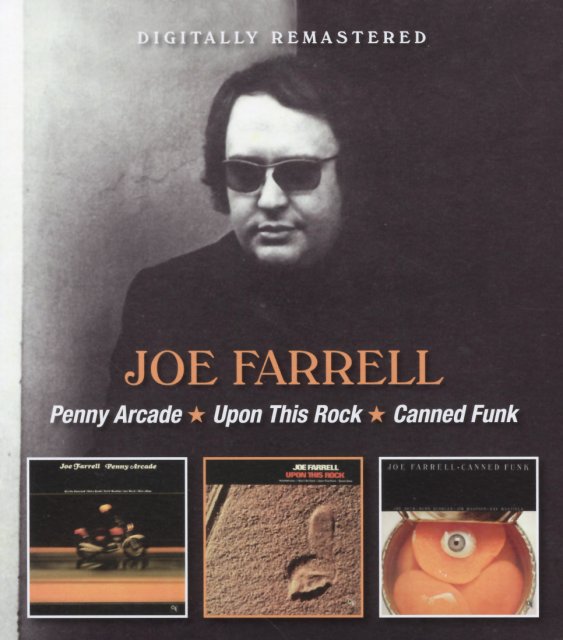 3 killer CTI classics from Joe Farrell in a 2CD set! Penny Arcade has grooves so sharp you could cut your trousers on them! Farrell's angular reed style is in perfect form here – grooving with a small group that includes Herbie Hancock on piano, Joe Beck on guitar, Steve Gadd on drums, and Don Alias on percussion – a combo that's got a harder, tighter feel than most CTI groups – a key reason why Joe's records of this time are so legendary! Includes a version of Stevie Wonder's "Too High" – one that breaks all over the beginning with these riffs by Farrell, then grooves into a CTI electric funk mode for about 13 minutes. All tracks are long – and other tracks include "Hurricane Jane", "Geo Blue", "Penny Arcade", and "Cloud Cream". Upon This Rock is another massive set from the funky reedman – with a lean, edgy groove to the set that's totally great. One cut features a guest group – with Herbie Hancock on piano, Steve Gadd on drums, and Don Alias on percussion – and the album includes the massively break-heavy title cut "Upon This Rock", plus "Seven Seas", "I Won't Be Back", and "Weathervane". There's nothing canned on Canned Funk – as the sound, style, and groove of the record is as fresh and freaky as the classic image on the cover! The sax lines are as angular as the rhythms – tight, choppy, and completely funky – no wonder the record's a CTI classic that folks have dug for years! Tracks are all nice and long – and titles include "Canned Funk", "Animal", and "Spoken Silence".  © 1996-2023, Dusty Groove, Inc.