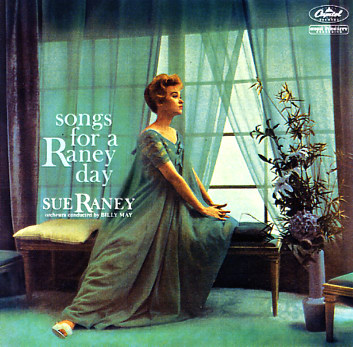 Songs For A Raney Day

A fantastic album by this obscure vocalist – one of the first in a great run of work recorded by Sue Raney on the west coast scene! This session has Sue sounding a fair bit like Chris Connor or June Christy – often a bit icy, and sometimes sweet – but without some of the fuller modes on her later records. The album's got surprisingly understated arrangements by Billy May that have a nice jazzy edge – and Raney's vocals have all the wistful qualities you might guess from the title and cover! Titles include "A Blossom Fell", "Impossible", "I Get The Blues When It Rains", "My Prayer", "Wanna Laugh?", "Rain On The Roof", and "Blue Tears".  © 1996-2021, Dusty Groove, Inc.
(SHM-CD pressing!)