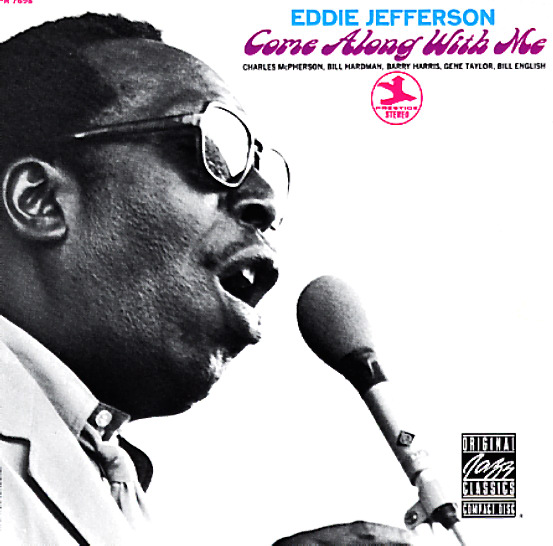 Come Along With Me

One of the grooviest albums ever from Eddie Jefferson – a perfect blend of his earlier vocalese roots with a hipper, more swinging 60s style of soul jazz! The album's got an upbeat, joyous feel throughout – exploding with the sort of dynamic energy we've always loved in Eddie's singing at its best – a charming, captivating groove that's unlike anyone else we can think of, and which is more Jefferson-esque here than on any other record by Eddie! The group's a tightly swinging ensemble that includes Bill Hardman on trumpet, Charles McPherson on alto, and Barry Harris on piano – and titles include the great leadoff tune "Come Along With Me", a bit of space age vocalese that has Eddie swinging his way to the moon – plus "Son Of A Preacher Man", "The Preacher", "Dexter Digs In", "Baby Girl", and "Please Leave Me Alone".  © 1996-2020, Dusty Groove, Inc.
(Blue circle logo label stereo pressing. Cover has two small cutout holes, some light stains, and notes in pen on back.)

King Pleasure Sings/Annie Ross Sings
Prestige, Early 50s. Very Good-
LP...$2.99
A record that revolutionized the concept of jazz vocals in the 50s – thanks to famous performances by Annie Ross and King Pleasure! The tracks on the LP include Ross' early interpretations of Wardell Gray's classics "Twisted" and "Farmer's Market", and the King Pleasure ... LP, Vinyl record album