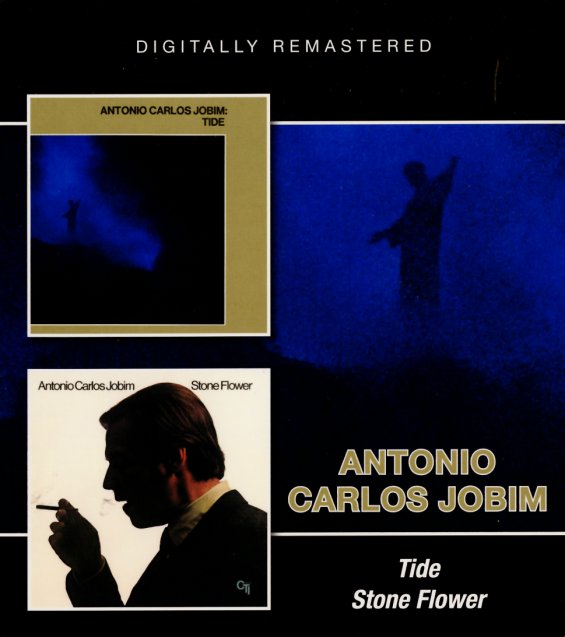 A pair of CTI records gems from Antonio Carlos Jobim – back to back on a single CD! First up is Tide – an incredible record from the first off-key note to the last! The album's filled with some wonderfully moody LA studio sounds, arranged by Deodato, and a has a great swirling mix of sound that weaves around Jobim's lofty guitar and piano beautifully – complex, but still with the airy sense of space that Antonio Carlos first brought to his music in the 60s. From the very first note, you can feel the strange magic of Jobim and Deodato at work – as the album appears to be smooth and mellow, yet has a strangely unsettling undertone that keeps us coming back after all these years! Tracks include "Tema Jazz", "Carinhoso", "Rockanalia", and a nice remake of "Girl From Ipanema". Stone Flower is one of Antonio Carlos Jobim's greatest records – and a perfect blend of his subtle bossa genius with the moody electric sound of CTI! Jobim plays electric and acoustic piano, guitar, and sings a bit – and Deodato handled the arrangements with a breezy brilliance that matches all the magic of Jobim's wonderful compositions, but gives them a slightly more fluid feel too – in a way that's somewhat more sophisticated than the sound of Jobim's previous CTI outings – Tide and Wave. Other players on the album include Joe Farrell on soprano sax, Hubert Laws on flute, and Airto on percussion – and there's a great mix of Brazilian and American styles on the set – electric, sinister, breezy, and always wonderful! Includes the titles "Sabia", "God & The Devil In The Land Of The Sun", "Children's Games", "Stone Flower", "Brazil", "Tereza My Love", and "Choro".  © 1996-2023, Dusty Groove, Inc.

Wave
CTI/A&M, 1967. New Copy
CD...$5.99 14.98
A stunning mix of talents that brings the heavenly piano and guitar of Antonio Carlos Jobim into play with the lush, but light arrangements of Claus Ogerman – a swirling mix of post-bossa loveliness that redefines Jobim's sound, and opens up new avenues for exploration in sound! The ... CD