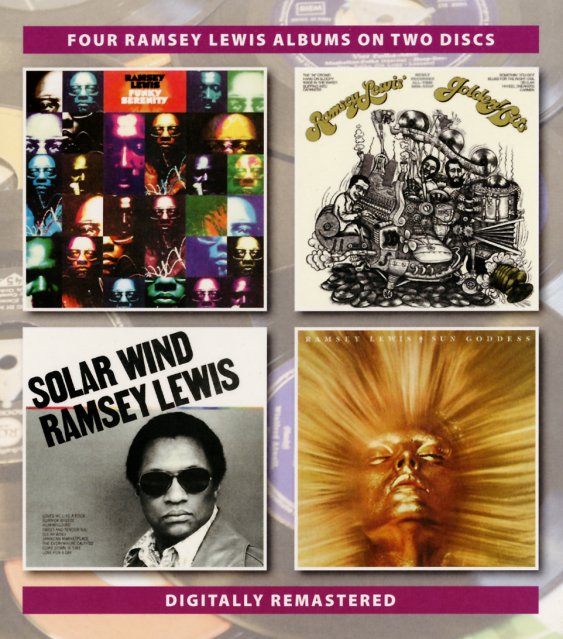 A quadruple-header from Ramsey Lewis – four albums from his great 70s electric period on Columbia Records! First up is Funky Serenity – sweet electric funk from Ramsey Lewis! The album's one of his best from the 70s – and it's got Ramsey on Fender Rhodes, electric harpsichord, and other keyboards, grooving away in an open-ended 70s mode that still retains all the heavy soul of his classic work for Chess. Morris Jennings adds in some very nice percussion with his drum work, and Cleveland Eaton's on funky bass, giving the set a strong bottom groove. Features the sublime sample cut "My Love For You", a great version of "Knights In White Satin" that's done with a weird spacey groove, plus the tracks "Kufany Mapenzi (Making Love)", "Serene Funk", "What It Is!", and "Dreams". Golden Hits isn't a "best of", but instead has Ramsey and his funky mid 70s trio with Morris Jennings and Cleveland Eaton revisiting some of his best loved material from the Cadet years, but with the groovy Rhodes and wah wah sound that we dig so much about his CBS recordings. Unlike some of the other records from this period, the group's nice and stripped down, just the electric piano, bass and drums, so the groove's nice and wide open, Ramsey and company popping along with the sanctified soulful vibe of his 60s work, but updating their sound with some nice electric touches. 9 numbers in all: "Hang On Sloopy", "Blues For The Night Owl", "Hi-Heel Sneakers", "Carmen", "Delilah", "Wade In The Water", "Slippin' Into Darkness", "Somethin' You Got", and "The In Crowd". Solar Wind was cut smack dab in the middle of Ramsey's glory days at Columbia Records – with great production help and work on bass from the mighty Cleveland Eaton! The style is nice and lean, with just some occasional fuller touches – and Ramsey plays plenty of Fender Rhodes, in addition to bits of Arp and moog too – in a setting that's mostly trio, with a few guest players stepping into the mix from track to track! There's a nice degree of fuzz at points, thanks to added help from Steve Cropper – and titles include a great funky version of "Summer Breeze", plus "Solar Wind", "Come Down In Time", "Love for A Day", "Hummingbird", "Jamaican Marketplace", and "Sweet & Tender You". Sun Goddess is one of our favorite Ramsey Lewis albums ever – and a perfect summation of the genius that was brewing on the Chicago scene in the late 60s and early 70s! The album has Ramsey working strongly with Earth Wind & Fire – no surprise, given his close ties to Maurice White, who was the drummer in Ramsey's trio before starting his own group – and the shared relationship both artists had with producer Charles Stepney! The three were all key parts of the late 60s sound at Chess Records – but here, they've brought the same soulful energy to Columbia – working in a wider, more mature groove for the 70s – one that has Lewis' wicked Fender Rhodes lines stretching out strongly over tight, compressed, funky lines from EWF! The centerpiece of the set is the massive 7 minute "Sun Goddess", but there's lots of other nice ones like "Living For The City", "Gemini Rising", and "Jungle Strut". Funky, electric, and sublimely wonderful all the way through!  © 1996-2021, Dusty Groove, Inc.