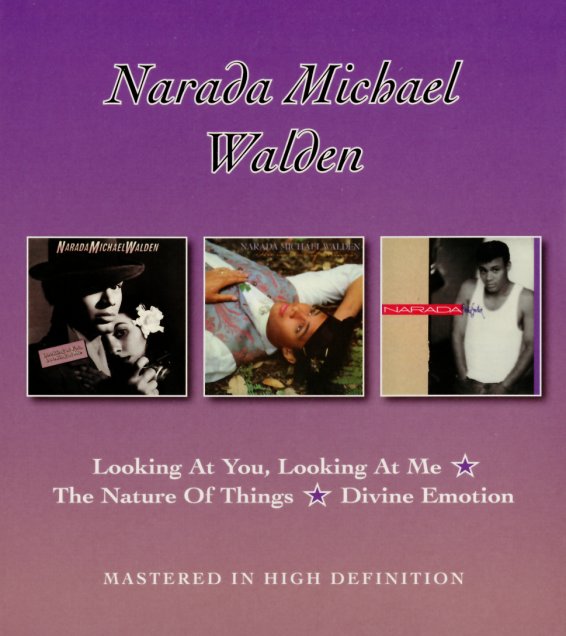 A trio of mid 80s albums from Narada Michael Walden – all together in one 2CD set! First up is Looking At You Looking At Me – an album with plenty of beats– so much so you might forget that Narada Michael Walden first rose to fame as a drummer – but all the electricity is fine with us, given the 80s groove sound of the set! There's a nice sense of energy that informs most of the tracks – a somewhat funky undercurrent that almost shows traces of the Minneapolis influence on soul at the time, but without a too-Prince sort of sound overall. There's also a few key ballads too – some gentler cuts that round out the set nicely, and which showcase the increasing confidence Walden's had with his vocals over the years. Titles include "Reach Out", "Looking At You Looking At Me", "Burning Up", "Shake It Off", "Dream Maker", and "Tina". Nature Of Things is a highly electric set from Narada Michael Walden – a mid 80s effort that's filled with catchy little tunes! The style's certainly more mainstream than we might have guessed, given Walden's early career – but it's still much better than most of the pop of its generation – thanks to Michael's strong jazz pedigree, which does seem to inform some of his arrangements and instrumental choices on the album. Most of the percussion is in the form of beats, but Walden's also credited with playing drums (roto-toms, perhaps?) – and in addition to his own lead vocals, the set also features work by Patti Austin and Marth Wash. Titles include "Live It Up", "Nature Of Things", "High Above The Clouds", "Gimme Gimme Gimme", "Suspicion", and "Dancin On Main Street". Divine Emotion is sweet 80s soul from Narada Michael Walden – a set that has the singer/drummer very confidently in the tight R&B territory that served him so well during the decade! As with previous records, there's a fair bit of 80s electronic elements in the mix – bursting, bubbling, and exploding with a joyful groove that really fits Walden's spirit – and serves to emphasize his ever-growing talent for penning at catchy tune! Titles include "Wild Thing", "Explosion", "Jam The Night", "Divine Emotions", "Can't Get You Outta My Head", "That's The Way I Feel About Cha", and "Certain Kind Of Lover".  © 1996-2022, Dusty Groove, Inc.

On The Rise
Remined/Colemine, 1970. New Copy
CD...$10.99 13.99 (LP...$21.99)
A lost Ohio soul treasure – the initial effort by a singer with a hell of a voice, but one who languished in obscurity after the poor response to this debut LP! Barbara Howard really knocks it out of the park here – singing like a deep soul diva with a hell of a lot of power and focus ... CD