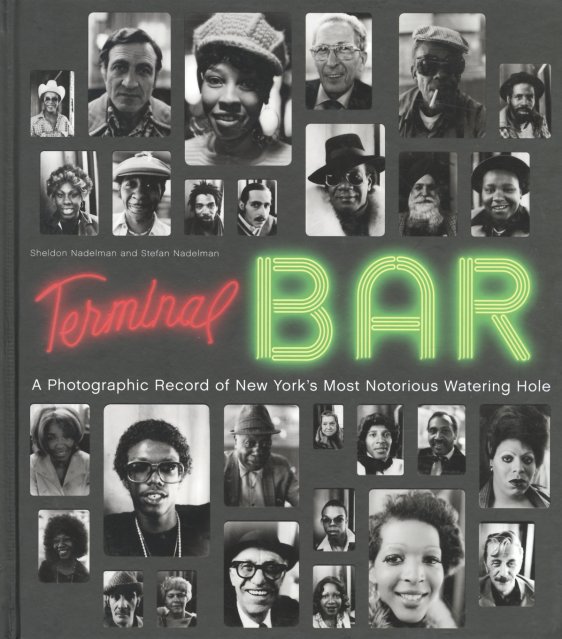 A beautiful look at a legendary Times Square watering hole – the Terminal Bar, located right next to a strip show at the corner of 41st Street and 8th Avenue – home to a countless stream of colorful characters, and also photographer Sheldon Nadelman! From his spot behind the bar, Nadelman not only sold artwork, but created it – as you'll see in this beautiful book of portraits – all shot in glorious black and white, with Nadelman acting as almost a living photo booth to document the patrons of the bar! Some of the images are clumped together to show the passages of years – and other groups focus on a single subject, with different images from different years. There's also brief text on some of the characters – although most of the images are more than illuminating on their own. The bar closed in 1982, and most images are from the 70s – a fantastically vibrant moment for Times Square – and although the book is only 176 pages, it features hundreds of photos throughout. Hardcover, black & white.  © 1996-2021, Dusty Groove, Inc.

Beware Collected Works Vol 1 – January 1953 to January 1954 – Issues 1 to 7 (hardcover)
PS Artbooks (UK), Early 50s. New Copy
Book...$9.99 49.99
Beware – the contents of this book are as creepy as the cover – seven full issues of this classic horror publication from the early 50s – all presented in living, lurid color! Beware was maybe one of the grittiest of its generation – and got even more so as the issues moved ... Book

Beware Collected Works Vol 2 – March 1954 to March 1955 – Issues 8 to 14 (hardcover)
PS Artbooks (UK), Early 50s. New Copy
Book...$9.99 49.99
Beware – the contents of this book are as creepy as the cover – seven full issues of this classic horror publication from the early 50s – all presented in living, lurid color! Beware was maybe one of the grittiest of its generation – and got even more so as the issues moved ... Book

Dark Mysteries Collected Works Vol 2 – June/July 1952 to June 1953 – Issues 7 to 12 (hardcover)
PS Artbooks (UK), Early 50s. New Copy
Book...$9.99 49.99
Dark Mysteries promises "eerie adventures" and it definitely lives up to that promise – as the book is filled with very creepy stories from the glory days of postwar horror comics! The publication ran alongside the early days of EC Comics horror, and also features some of that ... Book

Tom Corbett Space Cadet Collected Works Vol 1 – February 1952 to August/October 1952 & November/January 1953 to September/November 1954 (hardcover)
PS Artbooks (UK), Early 50s. New Copy
Book...$9.99 49.99
Great space age adventure from the postwar years – served up here in the guise of Tom Corbett, Space Cadet – a feature that was lavishly done by Dell Publications! The quality here is really a cut above – with beautiful painted covers, and a lack of ads that means that you'll get ... Book

Unseen Collected Works Vol 1 – June 1952 to May 1953 – Issues 5 to 10 (hardcover)
PS Artbooks (UK), Early 50s. New Copy
Book...$9.99 49.99
The Unseen has been unseen for decades – a short-lived publication that was part of the big pre-code horror comics boom of the early 50s – but this book brings back vintages issues in all their glory – complete with full color reproductions of all the stories, covers, and vintage ... Book

Dark Mysteries Collected Works Vol 1 – June/July 1951 to April/May 1952 – Issues 1 to 6 (hardcover)
PS Artbooks (UK), Early 50s. New Copy
Book...$9.99 49.99
Dark Mysteries promises "eerie adventures" and it definitely lives up to that promise – as the book is filled with very creepy stories from the glory days of postwar horror comics! The publication ran alongside the early days of EC Comics horror, and also features some of that ... Book

Adventures Into The Unknown Collected Works Volume 11 – August 1954 to July 1955 – Issues 58 to 64 (hardcover)
PS Artbooks (UK), Mid 50s. New Copy
Book...$9.99 49.99
Stunning work from the glory days of the 50s horror comic – issues of the legendary publication Adventures Into The Unknown – one of the first and most important comics to plumb the depths of supernatural and science fiction! The publication inspired countless imitators, but was always ... Book