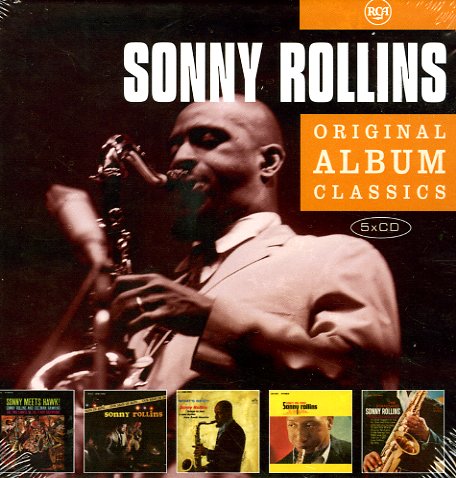 3 years' of music spread out on 5 different CDs – some of the best albums recorded by Sonny Rollins in the 60s! The package is a great look at the key sides that Sonny recorded for RCA in the years right after his return to playing in the early 60s – and every record here is a treasure, each different in its own way! Sonny Meets Hawk features a landmark live meeting with Coleman Hawkins; Our Man In Jazz is an extended live workout, with some of his most adventurous blowing to date; What's New has a great inflection of Latin and Caribbean rhythms in the music; Now's The Time is a wonderful quartet date with Herbie Hancock on piano, and guest cornet from Thad Jones; and Standard Sonny Rollins is a return to inside playing, but with key evidence of the modern lessons from previous records. Each album comes packaged in a tiny 5" record sleeve – just like the original – and all are contained in a larger slipcase too. A few records feature bonus tracks – and the set includes 38 tracks in all, including bonus cuts!  © 1996-2022, Dusty Groove, Inc.
(Out of print.)