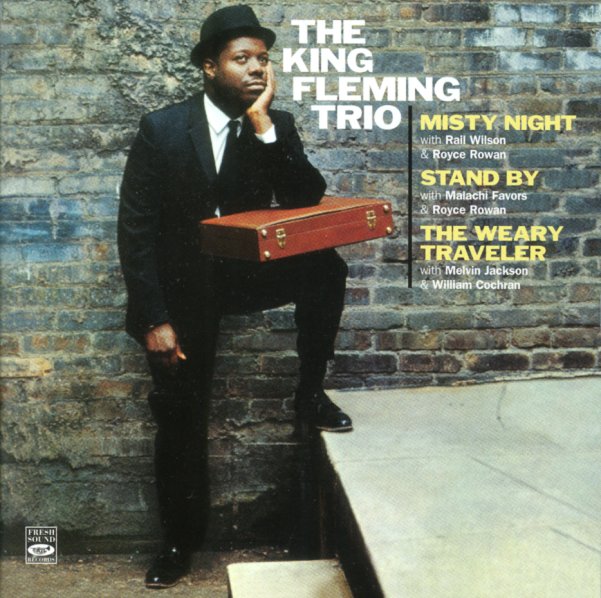 Three great albums on 2 CDs! First up is Misty Night with moody piano tracks from Chicago's soul jazz underground of the early 60s! King Fleming was one of the city's great underrated pianists, and this 1960 album for Chess/Argo features him playing a nice set of originals and standards, in the style that he would have used in the city's smaller jazz rooms at the time. Most tracks are trio format, but a few feature some very nice augmentation by bongos. Titles include "Overt", "Should I", "Ooooo, Those Blues", "Misty Night", and "Imported Blues". Next is Stand By – this set's got a really incredible feel – partly in the gentle groove of Ahmad Jamal, but also with one ear towards the more righteous rhythms that were coming into piano jazz during the 60s. A key element of the strength of the set is work in the trio by bassist Malachi Favors – working here years before his time with the Art Ensemble Of Chicago – and the set's also graced by some wonderful originals that show Fleming to be a heck of a great writer as well as musician! Titles include "Time Out", "Stand By", "On Green Dolphin Street", "Song Of Paradise", "Between The Toes", and "Lonely One". Finally we have Weary Traveler, King Fleming's third trio side for the Argo label – a variety of standards with a few Fleming originals thrown in for good measure. In the Chicago piano trio tradition of Ramsey Lewis or Ahmad Jamal (who actually followed in Fleming's footsteps), this set covers soulful ballads like "Dearly Beloved" or "I Remember You" and bluesy originals like Fleming's "Darn It" and "Riff A Plenty". Like Von Freeman, King Fleming's is a voice seldom heard outside of Chicago, while quietly influencing many of the more well known stars to come to prominence on the national and international scene.  © 1996-2021, Dusty Groove, Inc.

Poinciana
Argo/MCA, 1958. Used
CD...$4.99
The tune "Poinciana" must have been written by Jamal – as the lyrical flowing style of the song is perfect for his deeply soulful piano style. It wasn't, though – although this recording of the tune has made it one of the biggest in Jamal's book from the time, a perpetual ... CD

Soul Of Toots Thielemans
Fresh Sound (Spain), 1959. Used
CD...$9.99
One of the strongest jazz albums we've ever heard from Toots Thielemans – and one of the straightest, too! The session has a no-gimmicks, straight-ahead approach that features Toots grooving on guitar and harmonica in small combo format – working with the Ray Bryant trio, and coming up ... CD

Bosses Of The Ballad/Spectrum
Argo/Lonehill (Spain), 1964/1965. Used
CD...$8.99
2 of the more unusual Illinois Jacquet sessions for Argo – back to back on one CD! On Bosses Of The Ballad, Jacquet's gutsy tenor sound is restrained a bit in a beautiful batch of Cole Porter ballads, played with accompaniment by a small orchestra of woodwinds and strings. Benny Golson and ... CD

Message (The Message/Desert Winds)
Argo/Lonehill (Spain), 1963/1964. Used
CD...$16.99
2 killers from Illinois Jacquet – back to back on one CD! The Message is a really hard groover from Jacquet's later years on Chess – a solidly smoking session that features plenty of organ and guitar! There's a gutbuckety groove here that's a lot like some of Willis Jackson's best ... CD

Plays Alto, Tenor, & Baritone (plus Zoot)
ABC/Fresh Sound (Spain), 1956. Used
CD...$9.99
Two albums on one CD – both of them great! The title set is one of the grooviest 50s albums ever from the legendary Zoot Sims – a session that uses overdubbing to let Zoot create a one man horn section – blowing on record at the same time on alto, tenor, and baritone sax! The ... CD

Chamber Music Of The New Jazz
Verve/Argo, 1955. Used
CD...$9.99
Beautiful work from Jamal's early Chicago years – and a perfectly titled set that really gets at the differences he made in modern jazz! The tunes are wonderfully fluid, soulful, and swinging – but not in the gutbuckety style of other trios of the time, more in a lightly modern style ... CD

Go Power (plus bonus tracks)
Argo/Lonehill (Spain), 1962/1966. Used
CD...$11.99
Go Power indeed – as the album's a really stripped down groover, and one that has the tenor of Illinois Jacquet working in spare trio formation with Milt Bucker on Hammond and Alan Dawson on drums! The record's got a sound that's even earthier than some of Jacquet's other work for Argo ... CD