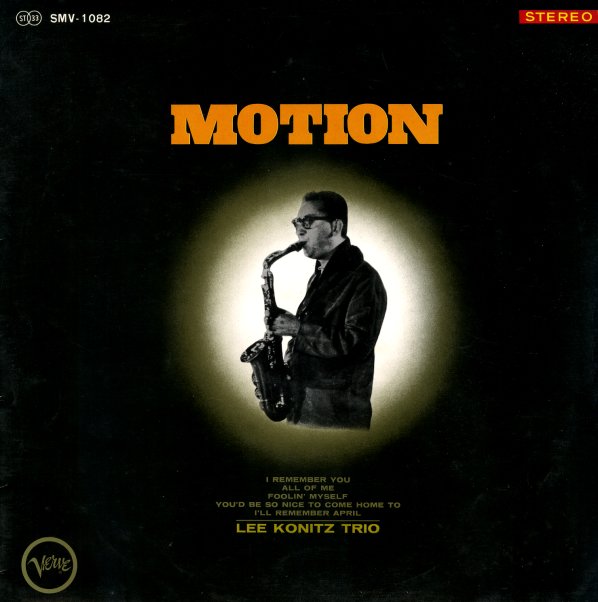 A pivotal album in the career of Lee Konitz – and one that shows him really stretching out, past his tightly arranged style of the 50s! Lee's working here in a fairly free trio setting – backed by only Sonny Dallas on bass and Elvin Jones on drums. Jones plays loosely and openly on the kit, taking Lee through some great extended tracks that bristle with a sharp and modern energy that stands in great contrast to the cooler Konitz sound of the 50s – into a style that almost matches the energy of Sonny Rollins' classic Live At The Village Vanguard recordings for Blue Note. Titles include "All Of Me", "You'd Be So Nice To Come Home To" and "I'll Remember April".  © 1996-2020, Dusty Groove, Inc.
(Very cool vintage Japanese pressing – with different cover image, in flipback cover!)

An Image – Lee Konitz With Strings
Verve, 1958. Very Good-
LP...$13.99
A rare "with strings" session for altoist Lee Konitz – recorded back in his great years with Verve, set to wonderful arrangements from a young Bill Russo! The style here is a bit darker and more spare than some of the other albums of this type from the time – and Russo brings ... LP, Vinyl record album

Lee Konitz Duets
Milestone, 1967. Near Mint- Gatefold
LP...$24.99
An interesting concept record, with Konitz approaching a variety of material, much of it written by his collaborators, in wide open duet settings. Players include Jim Hall, Joe Henderson, Elvin Jones and Richie Kamuca, and on each piece, both Konitz and his companion have loads of room to ... LP, Vinyl record album

Spirits
Milestone, 1971. Near Mint-
LP...$14.99
A nice little session from Lee Konitz – simple, without many tricks, and a great 70s extension of the sound of his 50s work! The group's a quartet with Sal Mosca on piano – and on a number of tracks, the pair of them play together alone, Lee blowing introspectively, and Sal working in ... LP, Vinyl record album