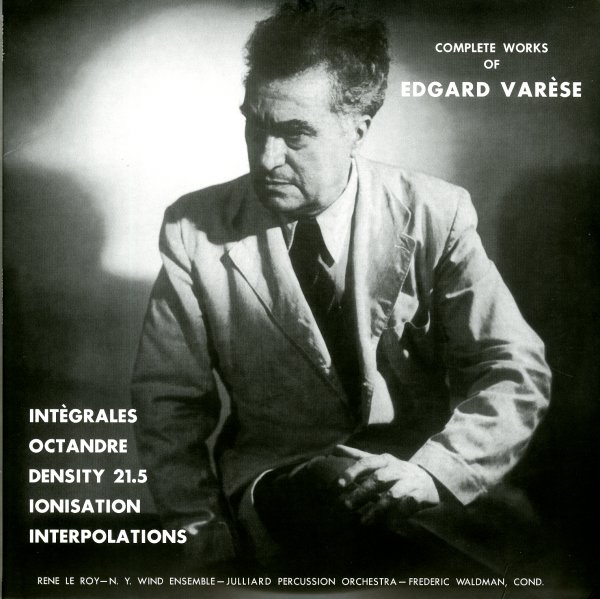 3CDs
Temporarily Out Of Stock

A trio of albums that represent important early recordings of compositions by groundbreaking sonic genius Edgar Varese! First is the album Complete Works – an early series of recordings supervised by composer Edgard Varese – featuring versions of what were then his complete works! The record begins with two larger pieces – readings of "Integrales" and "Octandre" conducted by Frederic Waldman, working with the New York Wind Ensemble, who provide some very haunting tones, with additional percussion from the Julliard Percussion Orchestra on the first piece, which is a bit more dramatic. Rene Le Roy continues on the flute solo piece "Density 21.5", and the Julliard Percussion Orchestra comes back for a reading of the classic "Ionisation". The last work is one of the most striking – the three-part "Interpolations", which features "organized sound" compositions, realized on magnetic tape – one of Varese's haunting moves into early electronic music! Next is the Columbia album Music Of Edgar Varese – key Robert Craft takes on three earlier compositions, and the debut of "Poeme Electronique", which was created at the 1958 Brussels World Fair! "Ionisation" has a complex mix of percussion instruments, played by thirteen players – with a quality that's almost a key precursor to the music of Harry Partch. "Density 21.5" is a haunting piece for solo flute – filled with unusual tones and textures – and "Integrales" has a fuller orchestral presentation, and a nicely bombastic vibe, with woodwind tones and percussion colliding beautifully! That sound continues in "Octandre" – a 20s composition that shows just how far Varese was ahead of his time – as does "Hyperprism", from the same year, which is even more dramatic. "Poem Electronique" has a very different approach – all analogue electronics, used in an illustration of Varese's concept of "organized sound", but with a feel that's similar to the best musique concrete material of the 50s. Last up is the Columbia album Sound Spectacular – which offers three very different slices of the genius of Edgar Varese – presented here on a set of classic Columbia recordings from the early 60s! "Arcana" is perhaps the most ambitious work here – structured for an orchestra of 120 musicians, 70 of whom are string players – although the core energy of the piece seems to come from the 8 percussionists who handle a wide variety of instruments – creating those stark sounds that mark some of Varese's most important compositions – which the strings, brass, and woodwinds cluster around in equally powerful ways! "Deserts" is a piece that's more subtle, and much longer – mixing a variety of electronic sounds and instrumental moments, with shifting sonic spaces and volumes throughout – all to make up a side-long recording filled with moody moments and more powerful electronic bursts. "Offrandes" is a selection of two songs – in a haunting blend of woodwind instruments, percussion, and trumpet – plus vocals from soprano Dona Precht.  © 1996-2021, Dusty Groove, Inc.