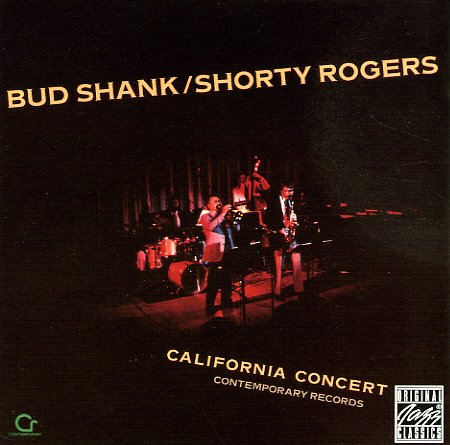 The title and cover are an homage to the Pacific Jazz label live dates from LA in the 50s – and the music here does a good job of following suit as well! Altoist Bud Shank and trumpeter Shorty Rogers are reunited beautifully in an open-ended live setting – the kind of date that really recalls some of the music Bud, Shorty, and some of their contemporaries recorded many years back – although with perhaps a rhythmic undercurrent here that shows new depths in jazz explored during subsequent decades. Remaining group members include George Cables on piano, Monty Budwig on bass, and Sherman Ferguson on drums – and titles include "Kansas City Tango", "Makin Whoopee", "It's Sand Man", "Aurex", and "Mia".  © 1996-2022, Dusty Groove, Inc.

Sonny Rollins & The Contemporary Leaders
Contemporary, 1958. Very Good+
LP...$99.99
One of Sonny's brilliant west coast sessions for Contemporary – records that shouldn't sparkle as much as they do, but which actually stand with his best work of the 50s! Sonny's blowing in front of a session of "leaders" that includes Hampton Hawes, Barney Kessel, Leroy Vinnegar, ... LP, Vinyl record album

My Fair Lady (Contemporary)
Contemporary, 1956. Near Mint-
LP...$14.99 19.99
A key early entry in the "jazz meets Broadway" genre – and a record that was so successful, it went onto inspire countless imitations! Shelly Manne's working here in a lightly playful trio setting – alongside Andre Previn on piano and Leroy Vinnegar on bass, in a reading of ... LP, Vinyl record album

Some Like It Hot
Contemporary, 1959. Near Mint-
LP...$11.99 14.99
A pretty nice jazz tribute to the Billy Wilder film of the same name – and one that reprises a number of tunes from the film, especially popular songs of the 20s – but brings them back in a way that's still got plenty of hip 50s jazz touches! The record's nicely without the hoke that ... LP, Vinyl record album