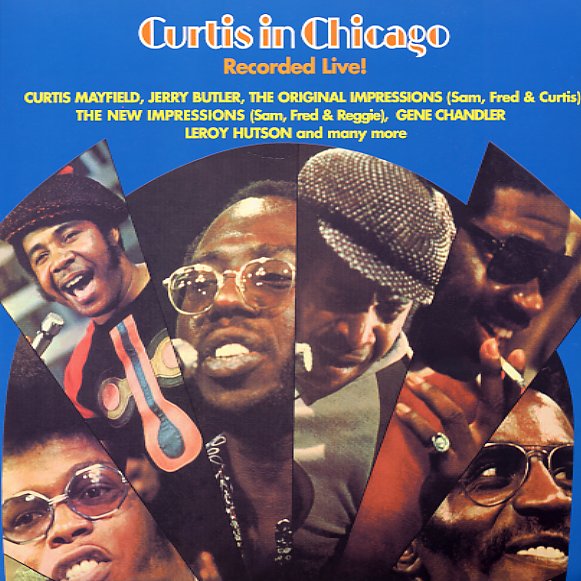 Curtis Mayfield, and a heck of a lot of greatness from the Chicago scene of the early 70s – music that comes from a rare TV special that also features guest appearances from Leroy Hutson, Jerry Butler, and Gene Chandler! Don't confuse this one with the 2LP Curtis Live set issued around the same time – as this record's got a tighter, fuller sound overall – a great illustration of Mayfield's growing fame as a solo act – although a set that's also generous enough to also feature appearances from both the new version of The Impressions, plus the original trio lineup too! Titles include "Superfly", "Love Oh Love", "Preacher Man", "For Once In My Life", and "I'm So Proud".  © 1996-2022, Dusty Groove, Inc.
(Cover has seam splitting and light surface wear.)

Let Me Be Your Woman
Curtom/RSO, 1979. Very Good 2LP Gatefold
LP...$2.99
Linda Clifford goes a bit over the top with this one – a lavish double-length set, of the sort that ended up bankrupting the Curtom label during the late 70s! Linda's very much in full-disco mode, singing to long clubby arrangements by Gil Askey that have more strings than before – and ... LP, Vinyl record album

Natural Four
Curtom, 1974. Very Good
LP...$24.99
Sweeeeet soul from the 70s! The Natural Four were one of the greatest soul harmony groups of the 70's – and their work on the Curtom label has an amazing "rough with the smooth" quality that really sets them apart from east coast groups of the time! Part of the strength of the set ... LP, Vinyl record album

Esther Phillips w/Beck (aka What A Difference A Day Makes)
Kudu, 1975. Very Good+
LP...$4.99
One of Esther Phillips' biggest comeback albums from the 70s – a classic set that takes her deeply soulful vocal approach, and sets it to some sweet jazz funk backings – served up by guitarist Joe Beck, who almost gets equal credit on the album cover! The rest of the lineup is equally ... LP, Vinyl record album