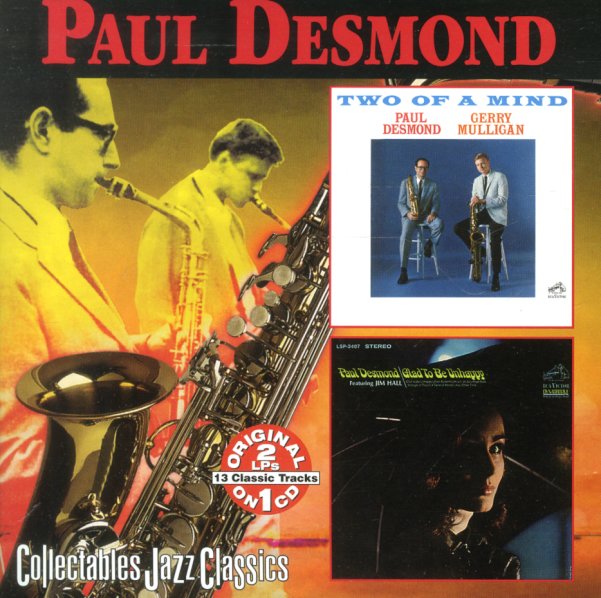 Two Of A Mind/Glad To Be Unhappy

Two albums of dreamy jazz from the great Paul Desmond – who at this point was turning into a very formidable player away from his old mentor, Dave Brubeck! Two Of A Mind features Desmond's alto next to the warm baritone of Gerry Mulligan – in a cool pairing that's made even better by the lack of piano work on the record. Titles include "All The Things You Are", "Two Of A Mind", "Out Of Nowhere", and "Blight Of The Fumble Bee". Glad To Be Unhappy is one of a number of excellent RCA albums that puts Desmond in the company of guitarist Jim Hall – a wonderful player whose spare cool tone was a perfect match for Desmond's alto. Again, the group has no pianist – and tracks include "Angel Eyes", "Stranger In Town", "Taste Of Honey", and "Any Other Time".  © 1996-2022, Dusty Groove, Inc.

Pure Desmond (Gold CD)
Epic/Legacy, 1974. Used
CD...$11.99 (LP...$16.99)
An album of sublime understatement from alto genius Paul Desmond! Desmond was one of the few players who resisted the lure of the 70s electric CTI sound – and stuck pretty much in his usual bag of easy-going grooves, blowing alto with effortless ease, working here with a quartet that ... CD