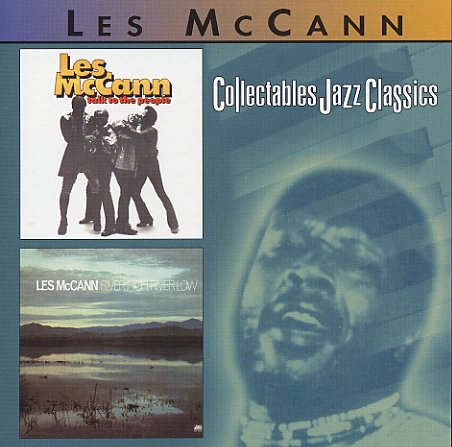 2 of Les' funky albums for Atlantic from the mid 70s – out again on reissue in their full electric glory! The records are a good example of how Les moved from being a mostly instrumental artist, and transformed himself into a funky soul singer for most of the 70s. The tracks have a warm spiritual sound that works well with Les' voice – which is not always technically perfect, but definitely full of soul. Titles include "You Little Cheat", "What's Going On", "Shamading", "North Carolina", "Let It Lay", "What is it That We Have To Do To Let Our Children Grow", and "Hand From The Crowd". 15 cuts in all!  © 1996-2023, Dusty Groove, Inc.

Comment
Atlantic (Japan), 1970. Used
CD...$18.99
A very hip record of vocal tracks – done in the same sort of spiritual soul style that Les introduced on Roberta Flack's first album, and which was also showing up on some of Donny Hathaway's work for Atlantic. While the record is not on of McCann's funkiest, it more than makes up for that ... CD

Much Les
Atlantic (Japan), 1969. Used
CD...$14.99
A groovy set of late 60s soul jazz piano tunes – played by Les McCann in a swinging style that pre-dates his 70s funk work – and which also features him playing in a strictly instrumental setting! The core of the material is by Les' trio with Leroy Vinnegar on bass – but most ... CD

Third World
TCB/Collectables, Early 70s. Used
CD...$7.99
Early 70s issue of a record recorded for the Warwick label in the early 60s – mostly led by Curtis Fuller, and under the name Soul Of Jazz Percussion. The record is a strange batch of soul jazz tracks that features a number of different groups with players like Fuller, Waldron, Little, ... CD