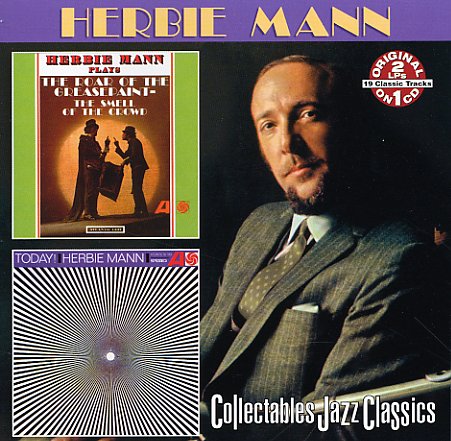 Herbie Mann Plays The Roar Of The Greasepaint , The Smell Of The Crowd/Today!

2 more 60s classics by Herbie – with some very groovy flute jazz tracks! Herbie Mann Plays The Roar Of The Greasepaint has kind of a silly gimmick, but the album's a nice one! Herbie plays flute over arrangements of tunes from this famous 60s musical – and although the arrangements are done by Ray Ellis, they've got a lot more of a groove than his usual work, and mostly bounce along in a jaunty mode that's a perfect foil for Herbie's flute style. Titles include "The Joker", "This Dream", "Who Can I Turn To", "Sweet Beginning", and "Feeling Good". On Today!, Herbie's soulful flute is set to large arrangements by Oliver Nelson – the man who was making it big with many other jazz soloists in the 60s. This album's different than most other Nelson hard-swinging efforts in that it's got a great group that features Jimmy Owens on trumpet, Dave Pike on vibes, and Patato Valdes on percussion. Tracks include "Arrasto", "Today", "Yesterday", "The Night Before", and "If You Gotta Make A Fool Of Somebody". Great op-art cover, too! It hurts our eyes to look at it!  © 1996-2021, Dusty Groove, Inc.

Reggae
Atlantic (Japan), 1974. Used
CD...$14.99
A surprisingly strong mix of 70s modes happening here – as the funky flute of Herbie Mann takes on some of the nascent reggae grooves of the time – with results that are a lot nicer than you might expect! There's some core rhythms on the record from Tommy McCook, but Herbie's regular ... CD

Push Push (with bonus track)
Embryo, 1971. Used
CD...$9.99 (LP...$8.99)
One of Herbie Mann's biggest albums – and one of his funkiest too! The cover's a bit of an off-putter – although it probably helped sell the record, back in the day – but the grooves are as rock-solid as anything that Herbie cut at the time – tight, focused, and a perfect ... CD

Gagaku & Beyond/Astral Island
Atlantic/Collectables, 1976/1983. Used 2CDs
CD...$11.99
A double CD set that brings together 2 of Herbie's stranger albums. Gagaku & Beyond is a weird bit of crossover work from Herbie – done an "eastern" style, with heavy Japanese influences, and tracks that are long, spare, and spacey, with a very meditative feel. Herbie's Family ... CD