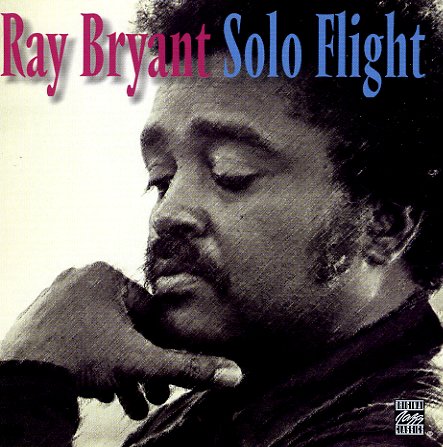 A great mix of bluesy rhythms and sensitive sounds from Ray Bryant – a later solo set that really shows the full range of his skills on the piano! The album's nicely unfettered – opened up in that pure Pablo way – and although Ray plays passages that hint at his soul jazz roots, there's also some moments of lyricism that really show his development as a player by the time of the mid 70s! Titles include "Moanin", "Take The A Train", "In De Back Room", "What Are You Doing The Rest Of Your Life", "Blues In De Big Brass Bed", and "Monkey Business".  © 1996-2022, Dusty Groove, Inc.
(Out of print.)

Here's Ray Bryant
Pablo/OJC, 1976. Used
CD...$12.99
A simple trio album, but a really great one – the kind that almost re-ignites Ray Bryant's career, which is a hard thing to do, given how many records he's already got under his belt! But somehow, there's really something fresh going on here – an array of sounds and modes that goes far ... CD

All Blues
Pablo/OJC, 1979. Used
CD...$4.99
A light and mellow set from Ray Bryant – cut very much in the mode of his best early Prestige/Moodsville sessions – with a trio that features Sam Jones on bass and Grady Tate on drums! The tunes are easy going, and touched with the bluesy inflections promised by the title – but ... CD

Takin Care Of Business
Jazzland/OJC, 1960. Used
CD...$12.99
A wonderful small group session from tenor genius Charlie Rouse – done at the time when he was first taking off with Thelonious Monk, but in a great style that's all his own! The group features Blue Mitchell on trumpet, Walter Bishop on piano, Earl May on bass, and Art Taylor on drums – ... CD

Latin Side Of Vince Guaraldi (CDr on demand pressing)
Fantasy/OJC, Early 60s. Used
CD...$7.99
A wonderfully sweet little album from pianist Vince Guaraldi – a lively dancer that has all the charm of his best soundtrack work, but which also inflects that tone with some really great Latin touches as well! Guaraldi's piano is incredibly lyrical – dancing with a sense of lightness ... CD

Spirits
Milestone/OJC, 1971. Used
CD...$9.99
A nice little session from Lee Konitz – simple, without many tricks, and a great 70s extension of the sound of his 50s work! The group's a quartet with Sal Mosca on piano – and on a number of tracks, the pair of them play together alone, Lee blowing introspectively, and Sal working in ... CD

Hawk Relaxes
Prestige/Moodsville/OJC, 1961. Used
CD...$5.99
The Hawk Relaxes, but never lets himself go – and a set like this is a great illustration of the gentle genius that made so many later Coleman Hawkins records so great! The relaxed setting for this record is a perfect setting for Hawkins to open up and stretch out – working his tenor ... CD

At Ease With Coleman Hawkins
Prestige/Moodsville/OJC, 1960. Used
CD...$4.99 (LP...$19.99)
Wonderful late work by Coleman Hawkins – a player who was very much "at ease" with himself at the time, and opened up tremendously on albums like this. The format is beautiful – simple small group backings by Tommy Flanagan, Wendell Marshall, and Osie Johnson – with ... CD

Eloquence
Fantasy/OJC, Mid 70s. Used
CD...$5.99
Beautiful sounds from Bill Evans – unreleased material from the mid 70s – one side that has Bill on electric and acoustic piano, with Eddie Gomez on bass – another side of solo acoustic work! CD

Together Again!
Contemporary/OJC, 1961. Used
CD...$8.99
Two of the best west coast boppers of the postwar years – back together again in a killer revival date cut by Contemporary Records! As the title implies, the set's got a backward-looking sort of feel – at least for the early 60s recording date – but from the perspective of our ... CD