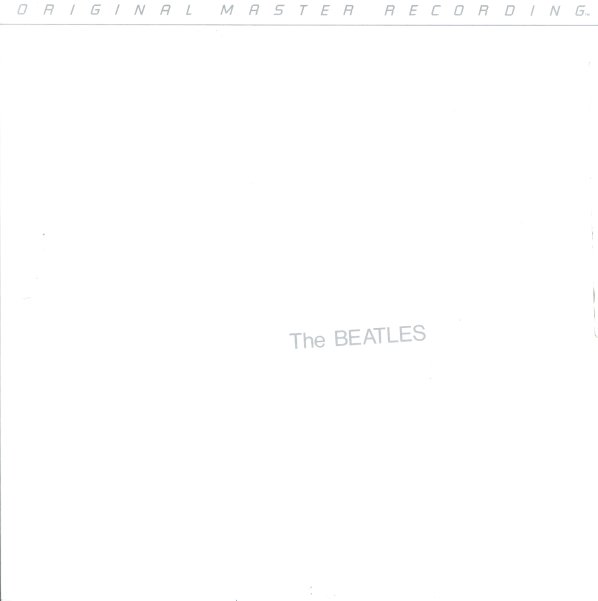 The Beatles at their late best – on 1968's self-titled set – now immortalized as The White Album! The White Album capped offed a period of intense creativity for the band with a double that's as freewheeling as anything they'd ever release. It's got raw rockers with wry lyricism, tender acoustic balladry, psych blues jams and some flat out weird bits. As was always the case, John's and Paul's songs cover the majority of the sides, but The White Album also features what's arguably George's most vital moment as a Beatle with "While My Guitar Gently Weeps". Other tracks include "Back In The USSR", "Dear Prudence","Ob-La-Di, Ob-La-Da", "Happiness Is A Warm Gun", "Martha My Dear", "Rocky Raccoon", "Why Don't We Do It In The Road", "Julia", "Yer Blues", "Sexy Sadie", "Helter Skelter", "Revolution 1", "Good Night" and more.  © 1996-2022, Dusty Groove, Inc.
(Original 80s pressing, with inserts. Cover has some ringwear and discoloration from age.)

With The Beatles (Original Master Recording)
Parlophone/Mobile Fidelity, 1963. Near Mint-
LP...$399.99
An iconic early cover image from The Beatles – with iconic early music to match! The tunes are short, tuneful, and undeniably great – that sound that instantly set the group apart from just about all of their contemporaries. Titles include "It Won't Be Long", "All My ... LP, Vinyl record album

Abbey Road (Picture Disc)
Apple, 1969. Very Good+
LP...$39.99
Pure brilliance from start to finish – especially the second side of the record, which has a continuous run of tunes that's very unique – and still completely sublime all these many years later! The album shows the fracturing ideas of the group, but crafted together with a unity you ... LP, Vinyl record album

Beatles' Story – A Narrative & Musical Biography Of Beatlemania On 2 Long Play Records
Capitol, Early 60s. Very Good+ 2LP Gatefold
LP...$11.99 (CD...$6.99)
A very cool artifact from the glory days of The Beatles – a set that features interviews with the group, words from their fans, and tracks from their records – all combined in a great mix of music and voice! LP, Vinyl record album

Beatles – 1967 to 1970
Apple, Late 60s. Very Good 2LP Gatefold
LP...$28.99
A fantastic collection of work from the second half of The Beatles great run in the 60s – a 2LP set that was a very important introduction of the group to 70s listeners! Titles include "Penny Lane", "Strawberry Fields Forever", "Back In The USSR", "While My ... LP, Vinyl record album

Let It Be
Apple, 1970. Very Good+
LP...$29.99 (CD...$5.99)
A bittersweet farewell from The Beatles – a record that definitely shows the fracturing unity of the group, with lots of near-solo moments – but a set that also makes us really wonder what they'd have done with all this genius, had they managed to hold it together! There's great hints ... LP, Vinyl record album

Sgt Pepper's Lonely Hearts Club Band
Capitol/Apple, 1967. Near Mint- Gatefold
LP...$49.99 (CD...$3.99)
Hard to deny the lasting power of this crucial album from The Beatles – a set that unleashed some of their trippiest sounds and most tender moments too! The mix of wit and honesty is wonderful – and the sonic range is dynamic as the archetypal cover image – a package that's had ... LP, Vinyl record album