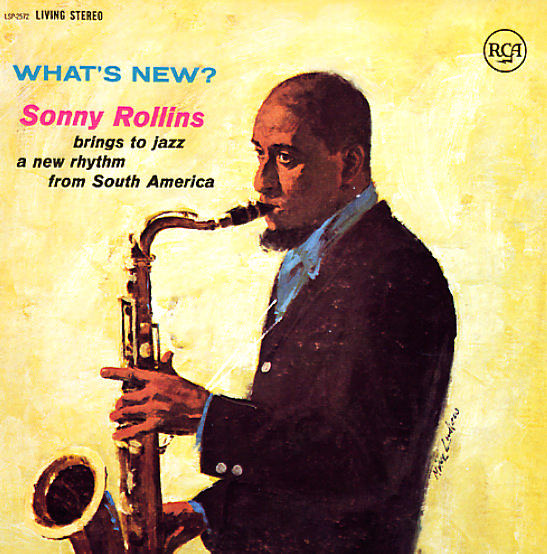 Also available
Sonny Rollins — What's New? ... LP 9.99
A very unique album from Sonny Rollins – one that features him blowing tenor over some Latin-based rhythms that have a tight uptempo feel. The core group on the album features Jim Hall on guitar, Bob Cranshaw on bass, and Ben Riley on drums – but they're augmented by larger arrangements that mix together bossa nova and calypso rhythms, which forge a surprisingly great background for Rollins' gutsy tenor. Although it's easy to dismiss the record as a throwaway cash-in affair on the Latin boom of the early 60s – Rollins actually handles himself wonderfully, and the longer-than-usual tracks on the album show a whole new side of his talents that were later reprised on Latin sessions during the 70s. Titles include "Bluesongo", "Jungoso", "The Night Has A Thousand Eyes", and "Brownskin Girl".  © 1996-2023, Dusty Groove, Inc.
(Out of print.)

Quartets Featuring Jim Hall
RCA/Bluebird, 1962. Used
CD...$2.99
A double album collecting Newk's excellent quartet recordings with Jim Hall for RCA. As such it contains work from The Bridge and What's New?, plus a few numbers that got tacked onto the Standard Sonny Rollins. Given Hall's gentleness and spare modernity on the guitar, a fan of Rollins' hard-blowi ... CD

Complete RCA Victor Recordings (6CD set)
RCA, Early 60s. Used 6 CDs
CD...$39.99
Some of the finest work Sonny Rollins ever recorded – done in a number of different styles, but always the height of brilliance! The albums that make up the set features Rollins working through a range of styles after his semi-retirement period of the late 50s: some tracks have Latin ... CD

Buddy Rich Plays & Plays & Plays
RCA/Wounded Bird, 1977. Used
CD...$9.99
A surprisingly great one from Buddy – full of live, liveliness, and energy – but also coming across with a depth that goes beyond simple Rich big band sounds. The album was handled by producer Norman Schwartz, and looks like it was originally recorded for his Gryphon label, but ... CD