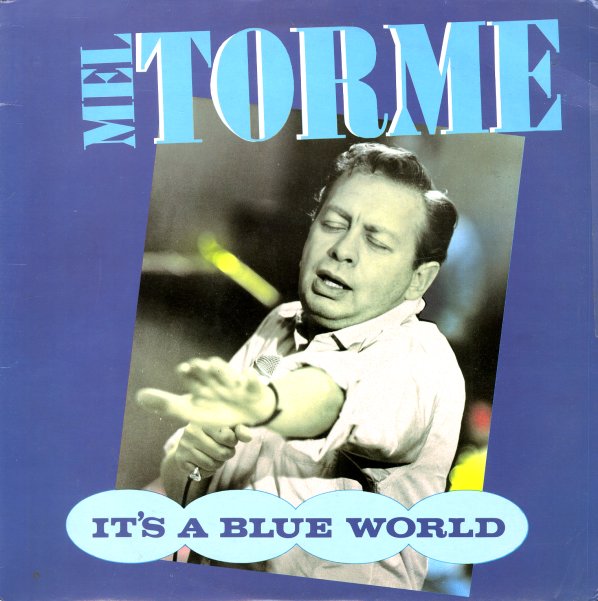 One of the most beautiful albums ever from the great Mel Torme – and a set that's a bit different than his other work for the Bethlehem label too! The set features Mel singing to lush backings from arranger Al Pellegrini – who brings in a mode that definitely lives up to the blue tones promised in the title – with enough melancholy moments in the mix to rival the sound of Frank Sinatra's classic Wee Small Hours album. The voice of the Velvet Fog is perfect in such a setting – and Torme's all serious, all classic, all the way through – no gimmicks or tricks or goofy moments at all. Titles include "How Long Has This Been Going On", "It's A Blue World", "Polka Dots & Moonbeams", "I Got It Bad & That Ain't Good", "All This & Heaven Too", "Wonderful One", and "Stay As Sweet As You Are".  © 1996-2023, Dusty Groove, Inc.

Torme – A New Album
Gryphon, 1980. Very Good+
LP...$1.99 (CD...$9.99)
A wonderful mid-career set from Mel Torme – a real sophisticated standout recorded in the years before his later comeback albums on Cocord – with a hip vibe that's relatively unique! The album's one of the late efforts from the Skye Records imprint – recorded in London with full ... LP, Vinyl record album

Torme
Verve, 1958. Near Mint-
LP...$24.99
An overlooked gem from Mel Torme – a great early album for Verve, one that's every bit as nice as his stellar work for the Bethlehem label! The set's got Mel singing with the Marty Paich orchestra – a good thing, too – as Marty's always been the best arranger for Mel's unique way ... LP, Vinyl record album

Chris Connor Sings Lullabys For Lovers (10 inch)
Bethlehem, 1954. Very Good
LP...$14.99
One of the most compelling early albums recorded by Chris Connor for Bethlehem – a sweet little 10" session that was part of her initial "lullabies" series! The backings on the set are extremely haunting – played by the Vinnie Burke Quartet, with a lineup that includes ... LP, Vinyl record album

Nina Simone & Her Friends – An Intimate Variety Of Vocal Charm
Bethlehem, Early 60s. Near Mint-
LP...$24.99
A classic collection of work from Bethlehem Records – a package that brings together some of their strongest jazz singers of the time, under a cover image that's similar to the first album by Nina Simone! The difference here is that the record features a killer non-LP track by Nina – ... LP, Vinyl record album

All Of Me (70s pressing)
Bethlehem, 1956. Very Good+
LP...$2.99
Although the world always remembers Johnny Hartman best for his Impulse recordings with Coltrane, we've always dug some of his earlier stuff – like this album – because the sound's a bit rawer, and the style's got more of a kick! The magical Hartman voice is presented in two great ... LP, Vinyl record album

Chris Connor Sings Lullabys Of Birdland
Bethlehem, Mid 50s. Near Mint-
LP...$29.99
A great set of tracks that represents some of Chris Connor's first recordings as a solo act – culled from earlier ep and 10" releases, and issued here on a full LP with a total of 14 tracks. Backing is by three groups – the Ellis Larkin Trio, Vinnie Burke's Quartet, and Sy Oliver's ... LP, Vinyl record album