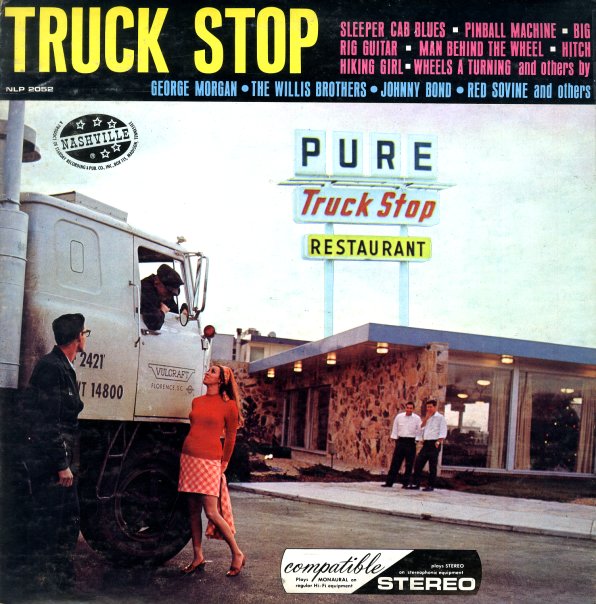 That's a mighty classy truck stop on the cover of this album – and the set's a mighty classy batch of trucker-themed tunes from the catalog of Starday Records! These aren't the shlocky truck country tunes of the 70s, but instead some great material from the postwar years – a time when the interstates were really opening up, and the role of the truck was about to surpass the role of the train. The tunes here all mark the new challenges of the time, sometimes with a good deal of humor – and titles include "Gears" by Johnny Bond, "Man Behind The Wheel" by George Morgan, "Long Haul Weekend" by The Willis Brothers, "Big Footed Dan" by Benny Martin, "Big Rig Guitar" by Joe Maphis, "Truck Driving Buddy" by Frankie Miller, "Sleeper Cab Blues" by Tom O'Neal, and "Pinball Machine" by Lonnie Irving.  © 1996-2021, Dusty Groove, Inc.

Pure Truck & Country – Truckdriving Songs By Country Stars
Starday/Nashville, 1960s. New Copy
CD...$2.99 9.98
Those are the Truckstoppers on the cover – a set of lovely ladies that the Pure Oil company sent around to truckstops in the 60s – which, along with the music here, reminds us that the decade was a perfect time for the marriage of the truck driver and country music! The set brings ... CD

Salute To Uncle Dave Macon
Starday, Mid 60s. New Copy
CD...$4.99 7.99
Stringbean's looking a bit more serious than usual on the cover, but maybe that's out of respect for his subject matter here – a set of tunes that were originally associated with Uncle Dave Macon – one of the first stars to emerge in the early days of country music! Like Stringbean, ... CD