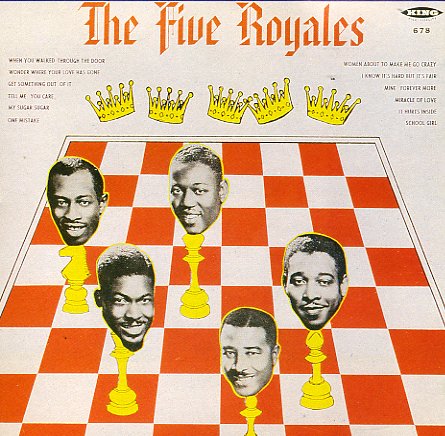 A stone killer from the legendary 5 Royales – one of the greatest groups to ever record for King Records in the 50s, and a key force in helping move things forward from doo wop to soul! The balance between Lowman Pauling's lead and the harmonies is amazing – a big inspiration on the young James Brown & The Famous Flames – and many cuts have this hard guitar used in a very rhythmic way, which creates a groove that few other groups could touch! The tracks all have a great hard-edged sound, with little of the schmaltz that can sometimes date these albums a bit too much – just lots of raw group vocals that definitely pave the way for 60s soul, but also have a stronger 50s R&B current in the background! The material is very rootsy soul stuff – and titles include "One Mistake", "Mine Forevermore", "Wonder Where Your Love Has Gone", "I Know It's Hard But It's Fair", and "Get Something Out Of It".  © 1996-2021, Dusty Groove, Inc.

Harlem Pop Trotters (180 gram colored vinyl pressing)
Kif/Underdog (France), 1975. New Copy (reissue)
LP...$26.99
A massive bit of funk – and from 70s France, no less! These guys clearly come from a jazz-based background – and have absorbed some of the best electric influences of their time – working in a keyboard-heavy mode that's clearly inspired by Herbie Hancock, Joe Zawinul, and George ... LP, Vinyl record album