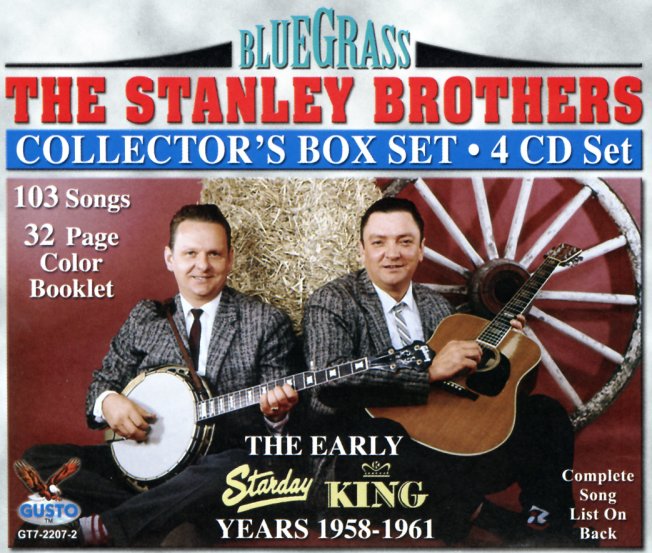 Our favorite years of the Stanley Brothers – material recorded after they'd left the bigger labels, and really started to hit their stride for the smaller indies King and Starday Records! Both companies were completely faithful to the growing sound of bluegrass, and really let the brothers take off and soar – unlocking that amazing harmony style that made their vocals so wonderful, and really honing their instrumental skills – often working alongside the mandolin of Bill Napier, whose talents here are tremendous! The set's way nicer than you might expect from the Gusto label – much more in a Bear Family mode, with very detailed notes, session information, and lots of images – all to support over 100 classic tracks, with titles that include "I Saw The Light", "Wild Bill Jones", "I'd Worship You", "Just Dreamin", "Beneath The Maple", "If I Lose", "Daybreak In Dixie", "Lonely Tombs", "Pass Me Not", "Purple Robe", "Wings Of Angels", "The Angel Of Death", "Your Selfish Heart", "How Mountain Girls Can Love", and our favorite-ever recording of "Man Of Constant Sorrow".  © 1996-2021, Dusty Groove, Inc.

Stanley Brothers Starday/King – Gospel Set – 1958 to 1965 (4CD set)
King/Gusto, Late 50s/Early 60s. New Copy 4CD
CD...$12.99 15.98
Heavenly sounds from this legendary duo – a great collection of spiritual sides the bluegrass brothers recorded for King and Starday Records – all material that was maybe even more important to their catalog than their secular singles! Ralph and Carter Stanley have a fantastic harmony ... CD

Cash On The Barrelhead
Gusto, Early 80s. New Copy
CD...$4.99 7.99
Really wonderful later work from the great Charlie Louvin – done years after the breakout of the famous Louvin Brothers duo, and after his brother Ira had passed on – a set of indie recordings that are mostly from the early 80s, and which show Charlie in pretty great formation on his ... CD