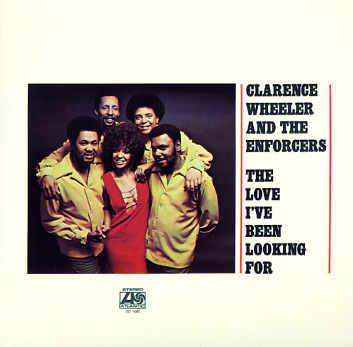 The second fantastic album from Chicago saxophonist Clarence Wheeler and his hard-hitting Enforcers combo – a group who were one of the brightest lights in soul jazz at the start of the 70s, really helping to keep the genre fresh and exciting! The groove here is in the tenor/organ mode first popularized in the 60s – but the overall sound is a lot more expansive, and filled with unusual time changes, complicated rhythms, and inventive solo work that go way beyond more familiar albums of this nature on Prestige or Blue Note! Sonny Burke is the organist in the group, and he's got a touch on the keys that's a lot like Jack McDuff at his best – filled with great sounds and unusual notes that always keep things interesting. Added to that is trumpet from Sonny Covington, guitar from Eric Gale, and tenor from Wheeler – all vamping and grooving in an amazing way! There's a bit of the Charles Earland sound from the same period going on here – and like Earland, the group have a great way of keeping things slightly funky, even when mellow! Titles include a great version of "Broasted or Fried", Charles Earland's "Mighty Burner", Jack McDuff's "The Heebie Jeebie Dance", plus "We've Only Just Begun" and "The Love I've Been Looking For".  © 1996-2021, Dusty Groove, Inc.
(Out of print. Includes obi!)

Bean Bags
Atlantic/Koch, 1958. Used
CD...$7.99
A wonderful little record – a real standout in both the careers of Milt Jackson and Coleman Hawkins! The album captures Hawk during his great later years – that time when his sound was even more soulful and inventive than ever – with lots of odd modern undercurrents that really ... CD