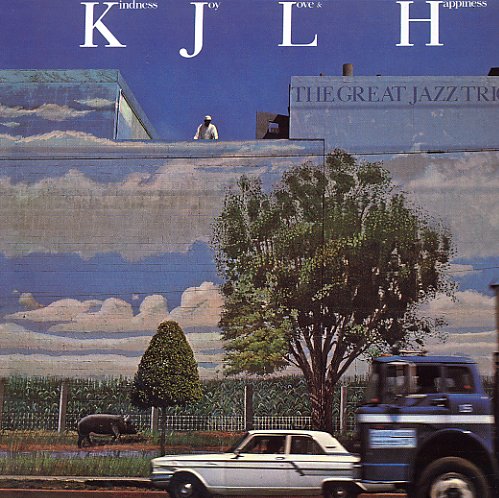 The title's a wonderful one – given the warmth and great spirit of this legendary trio – a near-perfect assemblage of the talents of Hank Jones on piano, Ron Carter on bass, and Tony Williams on drums! Both Carter and Williams help Hank to hit the hipper side of his talents for the 70s – and together, they work as one – with a well-rounded, well-crafted style that's a great testament to the group's strong appeal at the time. Titles include "Freedom Jazz Dance", "A Child Is Born", "Mr PC", "All Blues", and "Doom".  © 1996-2022, Dusty Groove, Inc.
(Out of print.)

Cross Country Tour 1958 to 1961
Chess/Universal, Late 50s/Early 60s. Used 2 CDs
CD...$4.99
Excellent live work by Ahmad Jamal – recorded during his classic years, when he was wowing audiences all over the US! The set features 2 CDs, with material recorded at the Pershing Lounge and Alhambra in Chicago, The Spotlite Club in Washington DC, and the Black Hawk in San Francisco. On ... CD

Jazz In Paris – Paris One Night Stand
Universal (France), 1957. Used
CD...$4.99
Another lost gem in this excellent Jazz In Paris series! This one features pianist Earl Hines working with a French rhythm combo of Guy Pederson on bass and Gus Wallez on drums. The material is relatively straightforward, but Hines is in great form – and the set includes 2 unissued bonus ... CD

Introducing Roland Kirk
Chess/Universal, 1960. Used
CD...$8.99
Despite the fact that the title's "Introducing Roland Kirk", it's not actually Kirk's first album – but it is a heck of a smoker with a very unusual sound! The session features Roland with a Chicago group that includes Ira Sullivan on trumpet, Don Garrett on bass, and Ron Burton on ... CD

Chubby's Back (Japanese paper sleeve version)
Argo/Universal (Japan), 1957. Used
CD...$19.99
With a name like Chubby, the set ought to be a snoozer – but it swings nicely, thanks to some strong bass work by Jackson! The group's a Chicago ensemble, featuring lesser-known players of the 50s – like Vito Price, Cy Touff, Don Lamond, and Jimmy Gourley – plus trombone by Bill ... CD

Beautiful Bamboo Flute (Japanese paper sleeve edition)
Victor/Universal (Japan), 1971. Used Gatefold
CD...$28.99
One of the coolest albums ever cut by Japanese wood flute player Hozan Yamamoto – a set that has him working with very groovy backings from the Sharps & Flats ensemble – who almost give the whole thing an MPS label blending of funky jazz and world music sounds! The approach is ... CD