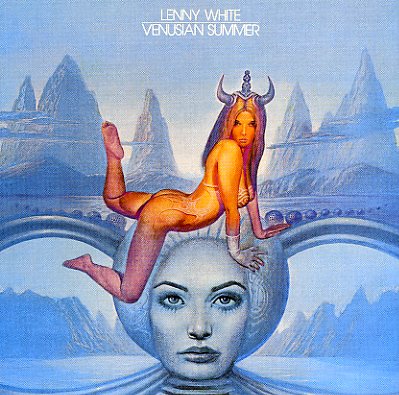 Drummer Lenny White was one of the strongest talents on the kit to emerge during the 70s fusion years – a player who was every bit as tight and powerful as Billy Cobham, and maybe even more far-reaching in his style – as you might guess from the cosmic image on the cover! The album's got more than enough propulsion to soar to the skies – with White on massive drums – working with a killer batch of musicians that includes Patrick Gleason on keyboards and electronics, Onaje Allan Gumbs on acoustic and electric piano, Jimmy Smith and Larry Young on organ, Larry Coryell and Doug Rodriguez on guitars, and Tom Harrell on flugelhorn – all working together in a razor-sharp mix of acoustic and electric elements! Titles include "Mating Drive", "Venusian Summer", "Chicken Fried Steak", and "Prince Of The Sea".  © 1996-2021, Dusty Groove, Inc.