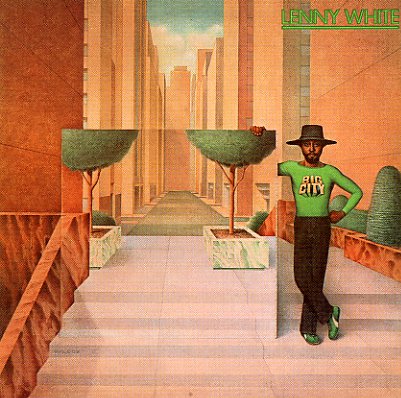 Also available
Lenny White — Big City ... LP 6.99
A great little album by Lenny White – nicely restrained in the best moments, with less of the heavy-hitting fusion sound that you'd hear on his other albums – and even done with a strong current of funk, which really sends the whole thing home in a great way! Space jazz maestro Pat Gleeson produced the album with Lenny – and also plays quite a bit of synth on the album – and we're convinced that it's Pat's subtler jazz talents that really make this one shine – those cool keyboards, and strong sense of balance that he brought to his own albums, and other productions of the time. Highlights include the spiritual soul number "Sweet Dreamer", with vocals by Linda Tillery and keyboards by Herbie Hancock – and the tight "Big City" groove, which features great contributions from both Brian Auger's Oblivion Express, and the Tower Of Power Horns. Other tracks include "The Ritual", "Rapid Transit", "And We Meet Again", "Enchanted Pool Suite", and "Ritmo Loco".  © 1996-2023, Dusty Groove, Inc.
(Out of print, promo sticker over barcode.)

Live At The Savoy
Columbia/Wounded Bird, 1982. Used
CD...$4.99 6.99
A live set, but one that's got some wonderfully rich grooves – almost one of the first times that Ramsey's excellent studio approach was attempted on record in a concert setting! The backings are quite full, and produced beautifully here by Tom Tom 84 – who really keeps a classy ... CD

Sky Blue
Atlantic/Wounded Bird, 1978. Used
CD...$6.99 9.99
Classic grooving from Klaus Doldinger and his Passport group – stretched out fusion with just the right mixture of jamming energy and spacey soul! The sound here still has some nice rough edges – not as polished as later Passport work – an almost proggish influence on the ... CD

Children Of Lima
Fantasy/Wounded Bird, 1974. Used
CD...$4.99 6.99
An overlooked chapter of the 70s genius of Woody Herman – and the kind of album that shows him continuing to grow strongly, many years after his initial fame! The record takes off ambitiously from some of the funkier Herman sessions of the start of the 70s – and features the core group ... CD