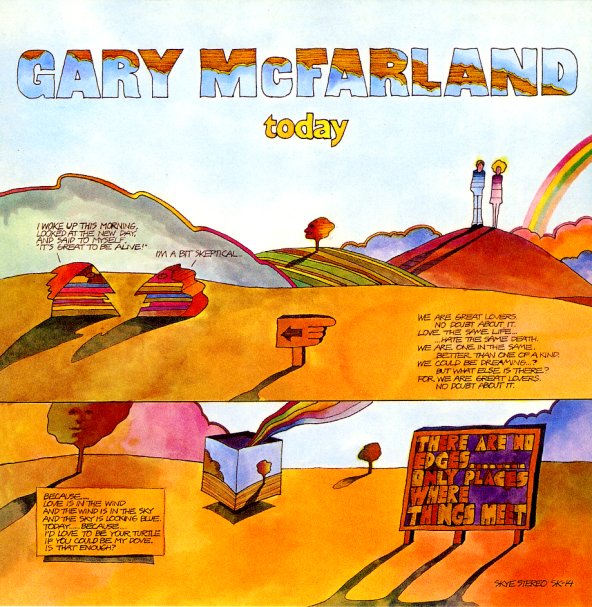 Wild stuff – and very different than Gary McFarland's earlier albums! Today was recorded late in Gary's career, and is has him moving a bit away from jazz – into a more sunshine pop feel – one that still retains plenty of the bossa and breezy elements of his Verve work, but which also features a bit more vocals and a cool and groovy style overall! Gary's singing on most tracks – not just in his wordless and whistling mode, but also taking some of the lyrics more directly – delivering them with a hauntingly-recorded quality that makes the whole thing sound beautifully moody. The core group is still quite jazzy – and features Hubert Laws, Curtis Fuller, and Grady Tate – plus some light cello, guitar, and even a bit of percussion by Airto. Titles include "Suzanne", "My Cherie Amour", "Sombras De Saudade", "Berimbau", "Desafinado", "I Will Wait For You", and the Beatles' beautiful tune "Because", done in a great breathy style! Moody and beautiful, and proof that McFarland was one of the 60s true pop geniuses!  © 1996-2021, Dusty Groove, Inc.
(Cover has a cut corner and light wear.)

Big City
Nemperor, 1977. Very Good+
LP...$9.99
A great little album by Lenny White – nicely restrained in the best moments, with less of the heavy-hitting fusion sound that you'd hear on his other albums – and even done with a strong current of funk, which really sends the whole thing home in a great way! Space jazz maestro Pat ... LP, Vinyl record album

Echoes Of An Era 2 – The Concert
Elektra, 1982. Very Good+
LP...$1.99
Not only a great follow-up to the first Echoes Of An Era session, but also a standout 80s performance from Nancy Wilson – quite possibly her best of the decade! The setting is nice and laidback – a live date with a core combo that features Joe Henderson on tenor, Chick Corea on piano, ... LP, Vinyl record album

Harper
Mainstream, Mid 60s. Very Good+
LP...$14.99
A hell of a soundtrack from the great Johnny Mandel – maybe his jazziest work of the 60s, and perfectly scored for this groovy cop film that stars Paul Newman as the 45-wielding title character! The vibe here is almost more 60s Quincy Jones than anything else – with sublime ... LP, Vinyl record album