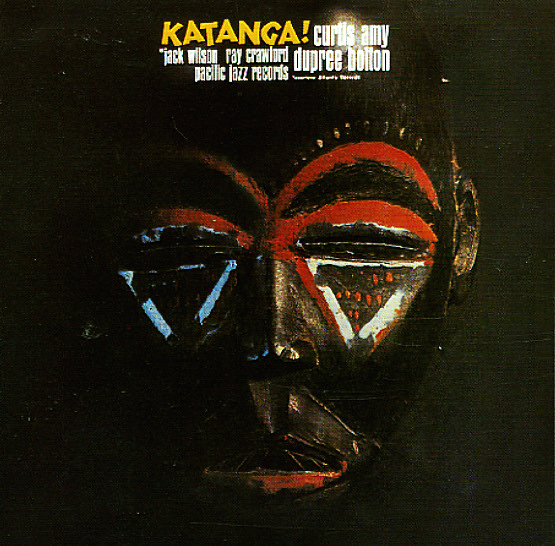 A stellar set from one of the most underrated reed players of all time – a brilliant bit of searching soul jazz, cut at a time when Curtis Amy was leaving behind his Texas roots for the new sounds of the Coltrane generation! The album's quite different than the organ and tenor dates that Amy had previously cut with Paul Bryant – and instead, is put together with a nascent spiritualism that's really wonderful – a sound that definitely lives up to the bold title and cover image, with lots of modal moments in the rhythms! The group features some equally under-acknowledged geniuses – including trumpeter Dupree Bolton, pianist Jack Wilson, and guitarist Ray Crawford – all coming together perfectly with Amy's work on tenor and soprano sax. The best tunes here are originals by the group members – including "Lonely Woman" (not by Ornette), "Katanga", "Native Land", and "Amyable".  © 1996-2021, Dusty Groove, Inc.
(180 gram Tone Poet Series pressing, with insert.)

On Stage (80s pressing)
Pacific Jazz, 1965. Very Good+
LP...$5.99
The title's a weird one, because the album was recorded in the studio and not on stage – but we're hardly going to complain, because the record's so great! Wilson is really cooking for this one – leading an all-great group that includes Curtis Amy, Roy Ayers, Jack Wilson, Joe Pass, ... LP, Vinyl record album

Les McCann Ltd Plays The Shout
Pacific Jazz, 1960. Very Good
LP...$9.99
A classic album in the mode of soul jazz piano grooviness that put Les on the map, even back in the early days! The album was recorded live at The Bit, on the Sunset Strip, in LA – and it features Les' classic group with Leroy Vinnegar on bass and Ron Jefferson on drums. Tracks are short ... LP, Vinyl record album

Keep The Customer Satisfied
Pacific Jazz, 1970. Near Mint-
LP...$9.99
Buddy certainly knew how to keep the customer satisfied – as you'll hear on this hip set of big band grooves, recorded by Buddy for Liberty Records in 1970. The set's got Buddy working with a tight group of younger players, in a mode that's not exactly funky, but which owes a lot to the ... LP, Vinyl record album

McCann/Wilson
Pacific Jazz, Mid 60s. Very Good+
LP...$14.99
2 of the greatest artists on Pacific Jazz meet head to head in the studio – as the Les McCann trio gets backed up by the Gerald Wilson Orchestra! Given the hipness of Wilson's sound, and the fact that his group features solo work by Teddy Edwards and Dennis Budimir, the overall approach to ... LP, Vinyl record album

Les McCann Ltd In New York
Pacific Jazz, 1961. Very Good
LP...$14.99 (CD...$13.99)
A killer live set by Les McCann – a rare 60s outing that moves past his more familiar trio format, and adds some horn players to the mix! The change is wonderful – as the set features work from Blue Mitchell on trumpet, and both Stanley Turrentine and Frank Haines on tenor – ... LP, Vinyl record album

Lookin' Ahead
Pacific Jazz, 1962. Very Good
LP...$16.99
A classic hard groover from this great soul jazz combo! The band are in perfect early form, and they wail nicely on some tight tight tight little tracks that virtually define the LA soul jazz sound of the 60s. Includes classics like "Young Rabbits" and "Big Hunk Of Funk" ... LP, Vinyl record album