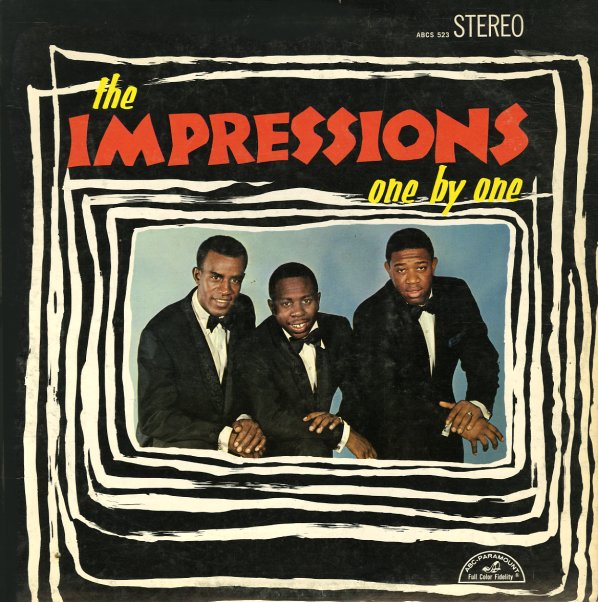 Classic 60s Impressions material, with the legendary lineup firmly in place, and the great Johnny Pate handling all arrangements – really giving them that sense of righteous power that pushed their music past a lot of the previous group soul sounds of the Chicago scene – with a sophistication in both the instrumentation and harmonies that's completely sublime! The album mixes Curtis Mayfield compositions – like "Lonely Man", "Just One Kiss From You", "Falling In Love With You" – with special Impressions' takes on tunes that include "My Prayer", "Without A Song", "Answer Me, My Love", "I Want To Be With You", and "Nature Boy", which the group does incredibly well. Proof that the Impressions could shine, whatever the setting!  © 1996-2022, Dusty Groove, Inc.
(White label mono promo! Cover has light wear and aging. Labels have small peel spots.)

We're A Winner
ABC, 1968. Very Good-
LP...$9.99
A new level of pride and power for The Impressions – as you might guess from the bold statement of the title track! It may seem hard to believe from the perspective of the 21st Century, but back in the mid 60s, a message like "We're A Winner" was quite a strong one – a new ... LP, Vinyl record album

Best Impressions – Curtis, Sam & Fred
Curtom, Late 60s. Very Good+
LP...$6.99
Very nice collection of mid period Impressions tracks, recorded during the time when the group had that perfect blend of sweet soul and political songwriting, without being as overblown as some of the later work by Curtis Mayfield. Every cut's a winner, and titles include "Mighty Mighty Spade ... LP, Vinyl record album

First Impressions
Curtom, 1975. Very Good+
LP...$5.99
Hardly the first album by The Impressions, despite the title – but a wonderful batch of modern soul tunes that proves that the group could groove long after Curtis Mayfield was gone! As with other Curtom gems from the 70s, the album has the group working with some really top-shelf help in ... LP, Vinyl record album

Loving Power
Curtom, 1976. Very Good+
LP...$5.99
Later Curtom work from The Impressions – but still plenty darn nice, with a super-dope vocal group approach on the best tracks! The title cut is worth the price of admission alone – as it's a slow-stepping harmony tune that really burns with a sweet mellow feel – sung to ... LP, Vinyl record album

Versatile Impressions
ABC, 1969. Sealed
LP...$11.99 14.99
A well-titled set from the fantastic Impressions – a record that mixes a few of their usual Curtis Mayfield-penned tunes with some other 60s material that really shows the range of the group on vocals! The arrangements are by Johnny Pate, who handled the group's best work of the 60s – ... LP, Vinyl record album

Preacher Man
Curtom, 1973. Very Good
LP...$9.99
Heavy soul from the early 70s version of The Impressions – put together with all the same depth as Curtis Mayfield's work of the time! This time around, Rich Tufo is at the helm on production and arrangements – but he continues to wave the Curtom flag high with some wonderfully put-toge ... LP, Vinyl record album