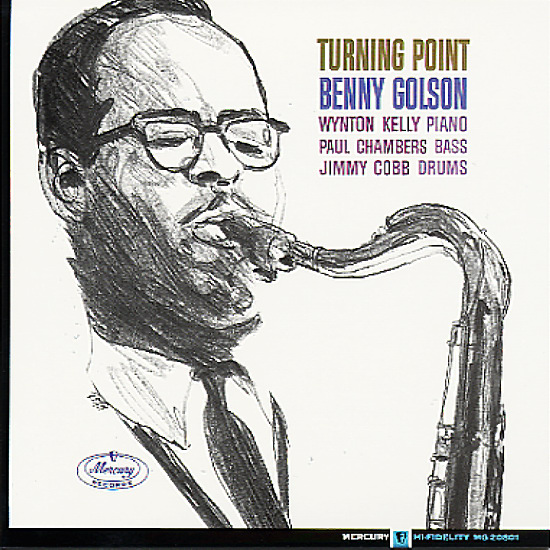 An incredible, and oft-overlooked album from the great Benny Golson – and one of the few early albums that really point the way to his huge run of work for decades to come! The style here is a bit looser, and more open than some of Golson's previous albums – less of a focus on arrangements, and more on the spontaneous interplay between his tenor and the crack rhythm section – which features Wynton Kelly on piano, Paul Chambers on bass, and Jimmy Cobb on drums – a dream lineup who really make the record sparkle. But the real star of the show is Golson – who's hitting this raspy, soulful tone he never had before – much freer of soul jazz formalities, and with a modern edge that's wonderful – as you'll hear on titles that include "Alone Together", "Turning Point", "Stella By Starlight", and "Dear Kathy".  © 1996-2021, Dusty Groove, Inc.
(Black label stereo pressing with deep groove. Cover has some light wear, and a small split on the top seam – but this is a nice copy overall!)

Quintet Vol 2
EmArcy/Mercury, Mid 50s. Very Good+ 2LP Gatefold
LP...$7.99
Second volume pulled together in the early 80s of Brownie's remarkable work with a smoking quintet that would record some of the finest bop sides issued on the Emarcy label. He's working here with Max Roach, George Morrow and Richie Powell and either Sonny Rollins or Harold Land as Brown's foil in ... LP, Vinyl record album

Beyond The Sun – An Electronic Portrait Of Holst's The Planets
Mercury, 1976. Near Mint-
LP...$6.99
One of the most ambitious records ever made by electronic wizard Patrick Gleeson – a huge talent on the moog and Arp, whose work was featured on key 70s jazz albums by Charles Earland, Joe Henderson, Bennie Maupin, and Herbie Hancock – and that's saying a lot, given that Herbie already ... LP, Vinyl record album

Kirk In Copenhagen
Mercury, 1963. Near Mint-
LP...$44.99
A rare slice of work by Roland Kirk from his early years – a great live set recorded in Europe in the mid 60's – done in a looser mode than his studio sessions from the time! Kirk's playing his usual array of incredible horns – tenor, stritch, flute, nose flute, and manzello ... LP, Vinyl record album

Ndeda
Mercury, 1972. Near Mint- 2LP Gatefold
LP...$14.99
Despite the fact that this album's got an African-sounding name, and features a painting of Quincy in tribal garb, the album's actually a compilation of his 60's stuff for Mercury – which was not very Afro-funky, but which is still pretty darn groovy! The record's got his stunning cut "S ... LP, Vinyl record album

Birth Of A Band
Mercury, Late 50s. Good
LP...$4.99
A very swingin, very groovy early album from Quincy – one that's clearly in the big band mode, but handled with soulful touches that really set it apart from the genre! The band is a great one all the way through – and the album features solos by Zoot Sims, Jerome Richardson, Phil ... LP, Vinyl record album

Music For Hi Fi Bugs
Mercury, Mid 50s. Very Good
LP...$14.99
The title makes this one sound like a batch of bachelor pad tunes, but the album itself is easily one of Pete Rugolo's best of the 50s – a really tremendous big band outing that's filled with all-star players – all in a groove that breaks Pete very firmly past his Kenton heritage! The ... LP, Vinyl record album