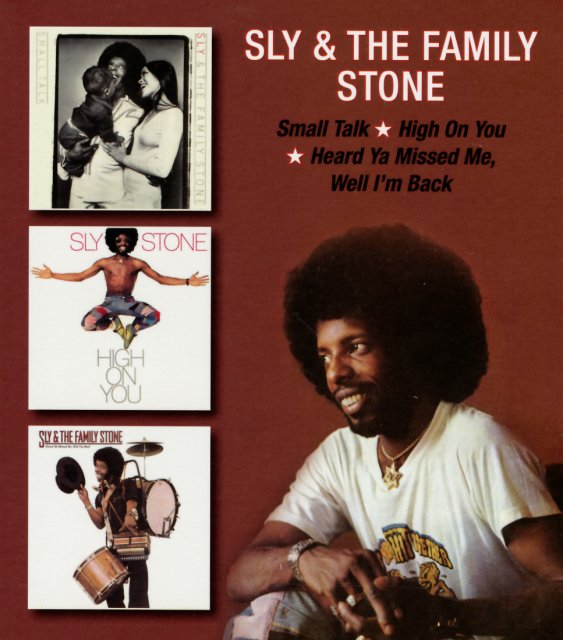 A trio of second-period Sly Stone albums – all brought together in a single CD set! On Small Talk, Sly's still doing pretty nice for himself in 1974 – with a sound that's perhaps a bit warmer than on the early records, but still nice and soulful – and peppered with a good dose of funk! The groove is really great on the set – bubbling with a more "deep down" feel than the skittish funk of the first few records, and breaking out on some great soul numbers that show Sly to be an even better singer than before – touchingly sensitive at times, in a really beautiful way! Titles include "Loose Booty", which has a wonderful popping bass/hollow drum sound, and a tasty break in the middle – plus the cuts "This Is Love", "Wishful Thinkin", "Time For Livin", "Can't Strain My Brain", and "Say You Will". High On You is a nice little mid 70s set from Sly – one recorded without the Family Stone, but still grooving wonderfully with lots of funky edges! Sly's expanded his sound nicely here – pushing past the shorter funk of earlier years to work in some complicated instrumentation that keeps things really sounding fresh. Great examples of this are the frenetic horn bits on "Crossword", which you'll recognize from its famous Tribe Called Quest sample – or the sweeping strings on the mellow groover "That's Lovin You". The whole thing's great – and other tracks include "I Get High on You", "So Good to Me", "Le Lo Li", "Green Eyed Monster Girl", and "Organize". On Heard Ya Missed Me, Sly Stone's looking like a one-man band on the cover, but the album's definitely got the full-on collaborative vibe of his early records with the Family Stone! The main man himself has plenty of charm, and still has that wonderful ear for a sharp-tinged funky cut – but he's also working in this mode that allows for other voices to come into the mix at times, and plenty of lively funky instrumentation underneath the lyrics – which really makes the whole thing feel like a party all the way through! Titles include "Sexy Situation", "What Was I Thinkin In My Head", "Mother Is A Hippie", and "Family Again".  © 1996-2021, Dusty Groove, Inc.