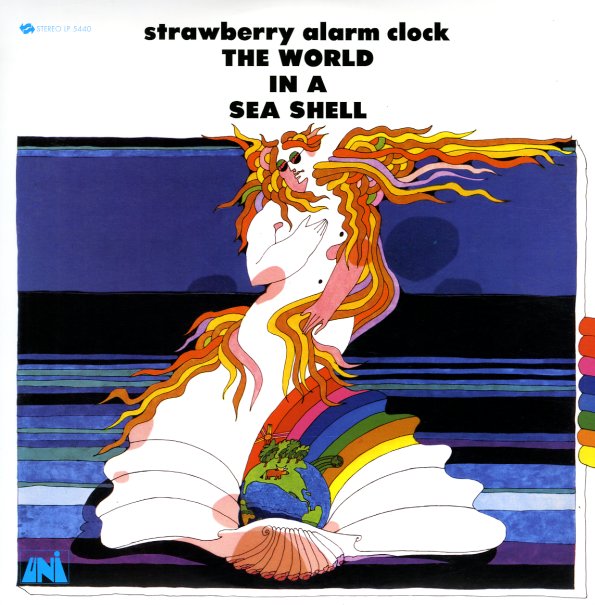 World In A Sea Shell

Fantastic sunshine pop from the Strawberry Alarm Clock – an album that's a bit trippy, a lot sunny – and just the right mix of psych and harmony soul! There's some wonderful overlooked nuggets on the record – tunes that go past their chart hits, and which really remind us that the group was definitely a cut above most of their contemporaries – with these edges and surprises that really keep things interesting. The mighty George Tipton helped arrange some of the best cuts – and titles include the massive "Barefoot In Baltimore" – a perfect bridge between the earlier 60s harmony sounds, and the headier mode of the later generation – as well as the tracks "Sea Shell", "Lady Of The Lake", "A Million Smiles Away", "Shallow Impressions", and "Eulogy".  © 1996-2022, Dusty Groove, Inc.
(Stereo pressing with T-1 matrix and small DCT etch. Cover has cutout hole, discloration from age, and a lightly bumped corner.)

Good Morning Starshine
Uni, 1969. Very Good Gatefold
LP...$24.99
The last album ever from The Strawberry Alarm Clock – and really heady set that's a lot more harder-rocking than before! The group have really kicked up the drums for the album – making a few cuts even slightly funky at times, in a way that really also helps push the strength of the ... LP, Vinyl record album

Ark 2
Uni, 1969. Very Good+ Gatefold
LP...$19.99
Phil Collins, whatever happened to you? You sounded so great on this album – recorded with your first group before Genesis, when you knew how to hit the drums nice and loud! The rest of the group's not too bad, either – and the album's got a great spacey jazz rock sound, mixed with ... LP, Vinyl record album