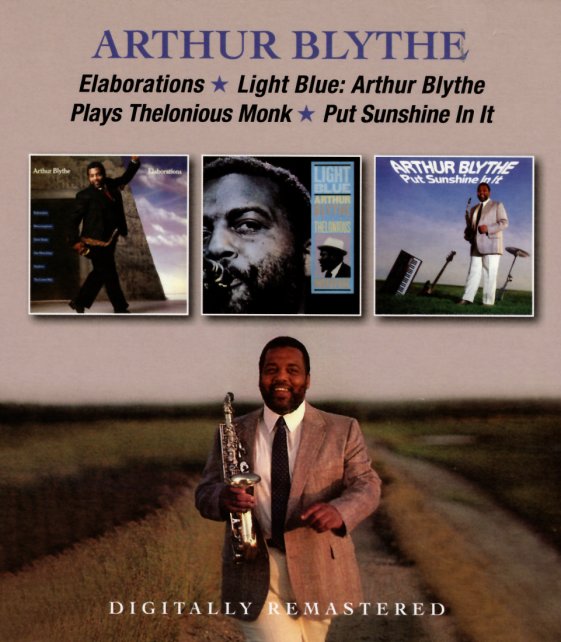 A trio of 80s albums from saxophonist Arthur Blythe – brought together in a 2CD set! First up is Elaborations – a beautiful moment in which the loft jazz generation really got a chance to shine in the mainstream – and mostly without any sense of overdone attempts at commercialization! The album's a great summation of all the ideas that reedman Arthur Blythe was cooking up in the 70s underground – performed here with a hip group that includes Blythe on alto, Kelvyn Bell on guitar, Abdul Wadud on cello, Bobby Battle on drums, Bob Stewart on tuba, Wilbur Morris on bass, and Mohammad Abdullah on congas – some of them players who you might never have expected to be recording for Columbia Records! And yet the setting of the record doesn't interfere with their creativity at all – and instead, really seems to give Blythe and the group the sort of focus that only makes their ideas even better – on titles that include "Elaborations", "Metamorphosis", "Sister Daisy", "Shadows", and "The Lower Nile". Light Blue is a wonderful record from saxophonist Arthur Blythe – a set that features his group working through a number of tunes by Thelonious Monk – but with very different arrangements and instrumentation that change things up completely! The set came at a time when Monk was receiving a lot of new attention in the world of jazz, and at a time when Arthur's star had risen too – and the meeting of forces is wonderful – as Blythe brings all sorts of new rhythms and tonal combinations to play with familiar tunes that really transform in the process. The group is a familiar one for Blythe – and features Abdul Wadud on cello, Kelvyn Bell on guitar, Bob Stewart on tuba, and Bobby Battle on drums! And while you might scratch your head at the tuba, the instrument is often used in ways that might follow older bassline styles – but with a quality that bridges the alto and cello in a great way. Titles include "Nutty", "Coming On The Hudson", "Light Blue", "Epistrophy", and "We See". Put Sunshine In It is a record that really seems to live up to its title – as the sound here is maybe a little bit sunnier than on some of Arthur Blythe's previous albums! The record features heavy contributions from Todd Cochran – aka Bayete – who plays keyboards on most numbers, and introduces more of an electric vibe to the album than previous Blythe outings. The style isn't entirely fusion, but it's definitely warm and sunny – and Arthur responds as such with his solo work – a tight tighter and less edgey, but still nicely soulful. The album features a nice remake of the tune "Sentimental Walk" – from the movie Diva – plus the tracks "Uptown Strut", "Silhouette", "Put Sunshine In It", and "Tumalalumah".  © 1996-2021, Dusty Groove, Inc.