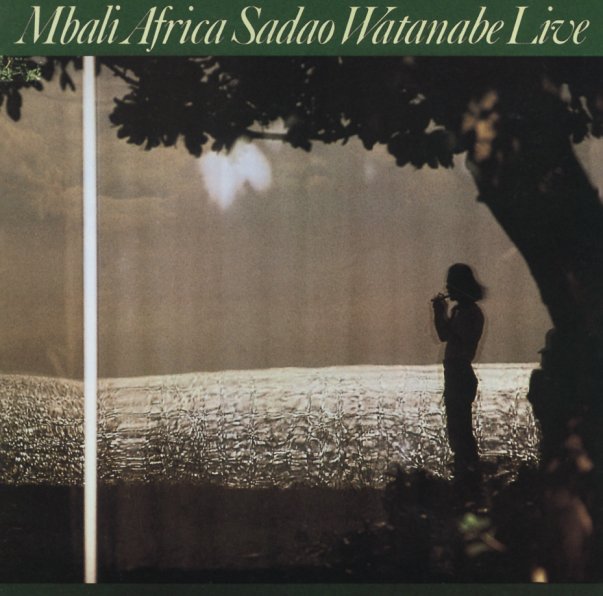 A fantastic live set of spiritual soulful post-Coltrane jazz! The great reed player Sadao Watanabe is playing here with a group that includes some of the best Japanese jazz musicians of the past 30 years – Takehiro Honda, Terumasa Hino, Motohiko Hino, and Isao Suzuki, among others. The "Africa" in the title might imply a more rootsy recording – but the continent is represented mostly in spirit, and in the additional hard percussion that punctuates a number of tracks on the set. The real strength, though, is in the jazz playing – which is hard and focused, with none of the indulgences that crept into some of the Japanese players' work at this time. Truly one of the greatest Sadao Watanabe albums ever – and with 2LPs worth of excellent material! Titles include "Afro Talk", "Hip Walk", "Tanzania Yako", "Tanu Song", "Jambo Bwana", and "Saba Saba".  © 1996-2022, Dusty Groove, Inc.
(Includes obi!)

Journey Into My Mind
Sony (Japan), 1974. Near Mint-
LP...$38.99
One of the greatest early 70s recordings from Japanese trumpeter Terumasa Hino – a richly organic session that builds from spare trumpet and percussion, into a fuller, more spiritual sound! Hino starts out the set working in almost Don Cherry territory – blowing alongside some slight ... LP, Vinyl record album

Sensitive Scenery
Sony (Japan), 1976. Near Mint-
LP...$24.99
Overlooked solo work from John Lewis – a lesser-known, Japanese-only session that features the pianist in a relaxed trio setting! The mode here is as spacious as some of Lewis' more contemplative records – still very much wrapped up in that careful sense of tone and timing – but ... LP, Vinyl record album

In Crowd
Argo, 1965. Very Good+
LP...$11.99
Easily one of the biggest selling jazz albums of the 60s – a crowning achievement for Ramsey Lewis and his popular trio with Eldee Young on bass and Redd Holt on drums! The set was recorded live at the Bohemian Caverns in DC, and the trio are perfect in the setting – going at the ... LP, Vinyl record album

Village Vanguard Sessions
Riverside/Milestone, 1961. Very Good+ 2LP Gatefold
LP...$44.99
Milestone 70s two-fer collecting the recordings of the classic (and best) Evans trio caught live at the Village Vanguard in 1961. This is the group that established Evans outside of the Miles group, playing a typical Evans set of standards, with a wonderful open sound that would influence ... LP, Vinyl record album

Three Blind Mice (Douglas Collection pressing)
United Artists, 1962. Very Good+
LP...$14.99
A really unusual live set from the great Art Blakey – his only album for the United Artists label, but one that continues the tradition of the expanded group style he was starting to use at Blue Note! The lineup here is a sextet, one that's got even more power than the Jazz Messengers as a ... LP, Vinyl record album