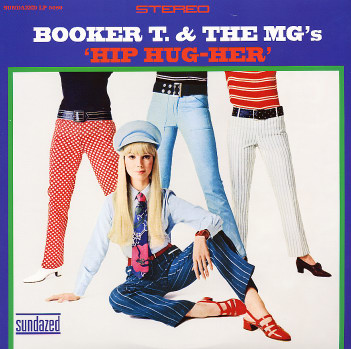 Booker T's definitely getting a bit funky with this one – stepping off with the incredible title cut, a tune which really complicates the groove from the earlier years! The sound is still solid Memphis soul, with a raw instrumental vibe – but the grooves are even better than before, and the set includes loads of great original number written by the group – the kind of cool tunes they most likely cooked up while jamming live in the studio! These gems include the seminal "Hip Hug Her" – plus "Carnaby Street", "Booker's Notion", "Soul Sanction", "Double Or Nothing", and "Slim Jenkins' Place". But the covers are groovy too – and include a version of "Pigmy", plus "Groovin" and "Sunny".  © 1996-2022, Dusty Groove, Inc.

Truck Turner
Stax/Ace (UK), 1974. New Copy 2LP
LP...$27.99 32.99
Massive work from Isaac Hayes – a hard and heavy soundtrack that we like even more than his classic work on Shaft! Unlike Shaft, Ike actually starred in the film Truck Turner – which may be one reason why he brought his full game to the table for the record – and scored a batch ... LP, Vinyl record album