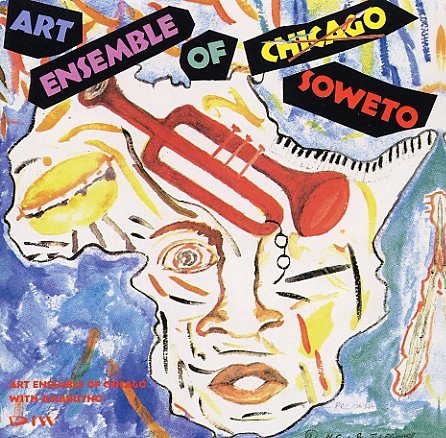 One of the more interesting later sessions from the Art Ensemble – one in which the group push their African influence strongly, by teaming up with the Amabutho Male Chorus for a real Soweto soul sound! Oddly, the Art Ensemble are the ones in African garb on the cover – while the chorus is going more for a late 80s American male fashion look – but in the grooves of the record, the two units come together nicely – and make for a set of tunes that have the AACM sound heading way way past Graceland (that's a Paul Simon/Ladysmith Black Mambazo reference, not an Elvis one!) – really coming up with some compelling cross-cultural sounds in the process. Titles include "African Woman", "Coming Soon", "Black Man", "Fresh Start", and "The Bottom Line".  © 1996-2021, Dusty Groove, Inc.
(Out of print.)

We Are On The Edge – 50th Anniversary Celebration
PI Recordings, 2019. Used 2 CDs
CD...$13.99 (CD...$20.99)
A tremendous tribute to the legendary Art Ensemble Of Chicago – a group who work here with only two of their surviving members, but with help from a constellation of jazz musicians inspired by their music! The group here is large, and includes AACM members and other younger talents – a ... CD

Jurassic Classics
DIW/Columbia, 1994. Used
CD...$4.99 (CD...$11.99)
There's nothing prehistoric about this set – as saxophonist James Carter's working here in an angular mode that's strikingly modern, despite the "classics" in the title! The tunes are all familiar ones, but they're recast by Carter with a deep tone on tenor, alto, and soprano sax ... CD

Night & Day
DIW (Japan), Used
CD...$28.99
A lovely little set from George Cables – quite expressive work on piano, but in ways that are a bit different from some of his American records at the time! George takes strong advantage of the open, sympathetic format of the DIW trio series here – and works wonderfully in a group that ... CD

Children Of The Light
DIW (Japan), 1995. Used Gatefold
CD...$14.99
Rodney Whitaker's always been way more than a bassist – and this beautiful set from his early years is a great reminder of what a great leader and composer he can be! The set mixes Rodney's own songs with some well-chosen numbers by others (including two gems by Francisco Mora) – ... CD

Jurassic Classics
DIW (Japan), 1994. Used
CD...$11.99 (CD...$4.99)
There's nothing prehistoric about this set – as saxophonist James Carter's working here in an angular mode that's strikingly modern, despite the "classics" in the title! The tunes are all familiar ones, but they're recast by Carter with a deep tone on tenor, alto, and soprano sax ... CD