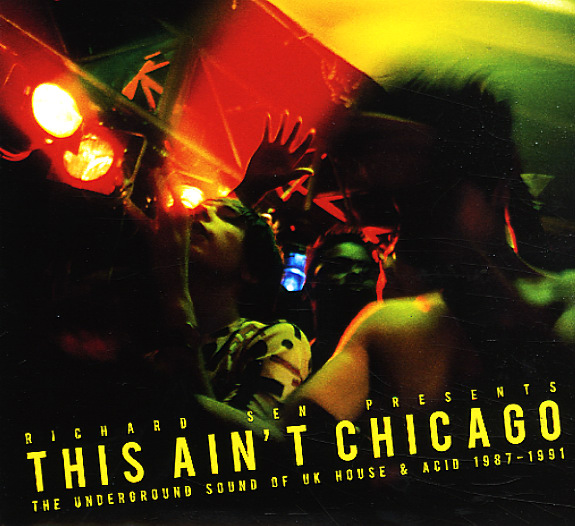 This ain't Chicago, but the sound here owes plenty to the Windy City as well – as the collection documents an amazing criss-crossing of cultural modes that occurred when early UK house musicians took the sound of the underground into the bigger British club scene! In a way, this music's a third chapter in a journey that began when the post-disco American underground were digging the styles of the British electronic generation – then began to craft their own music with early house productions from Chicago and Detroit. These rose in such popularity with UK listeners, that by the end of the 80s, the grooves reversed themselves, and flowed back over the Atlantic – inspiring musicians like these to take the best elements of American house music, particularly Chicago acid, and push it even further into something new! And while the generation yielded plenty of lame tracks and crossover pop, this set shows the real deal – those excellent initial singles that made digging UK singles almost as great as US ones, at least for a brief while. 2LP package features 10 titles that include "Take Me High (mansion mix)" by Colm III, "Show Me What You Got (acid mix part 1)" by SLF, "Jealousy & Lies" by Julian Jonah, "Where's The Love Gone (rmx)" by Julie Stapleton, "Safety Zone" by Exocet, "Pressure Dub" by Ability II, "1666 (pyro-maniac mix)" by MD Emm, "Free To Be" by Window Smashers, "Twin Tub" by Return Of The Living Acid, and "Crashing" by Baby Ford.  © 1996-2021, Dusty Groove, Inc.

Diggin Vol 4
Diggin Breaks, 1970s. Very Good+
LP...$16.99
17 funky tracks – all of them sampled by hip hoppers, and packaged in a nice cover with a goofy image! Titles include "Moses Theme" by Thom Bell, "Queen Of The Nile" by Young Holt Unlimited, "Move Over" by Soul Children, "What You Won't Do For Love" by ... LP, Vinyl record album

Ultimate Breaks & Beats Vol 6
Street Beat, 1970s/1980s. Near Mint-
LP...$19.99
Essential breaks from the early years of hip hop – volume 6 in the now-legendary Ultimate Breaks series! This one has the light blue cover, and the tracks here are all great – and include "Sing A Simple Song" by Please, "2001" by Cecil Holmes & The Black Motion ... LP, Vinyl record album

Sound Of Champions – Think About Number One EP
Sound Of Champions, 1970s. Sealed
LP...$7.99
A limited EP, with four funky nuggets – "Go For Yourself" by Kenny Smith & The Loveliters, "I Can't Dance" by Jimmy James Thomas, "Running Wild" by Sunrise Movement, and "Sing A Simple Song" by King Herbert & The Knights. All tracks are edits, ... LP, Vinyl record album

Brazilian Guitar Fuzz Bananas – Tropicalista Psychedelic Masterpieces 1967 to 1976
World Psychedelic Classics/Tropicalia In Furs, Late 60s/1970s. Near Mint- 2LP Gatefold
LP...$24.99 (LP...$28.99)
A fuzzed out treasure trove of rare Brazilian psychedelia – wild stuff that's in many ways akin to the freewheeling sounds of the Tropicalia movement, but not necessarily taking on the cultural and political weight of that movement – and more about the boundless spirit of psychedelia ... LP, Vinyl record album

Dinner Music
Cadet, 1969. Very Good+
LP...$19.99
Beautiful spacey soul and righteous rock/soul grooves from one of the most enigmatic groups ever to come out of the Chicago soul scene! The drummer really kicks it on this one – and more than a few cuts have a nice backbeat to them, and the record probably has a bit more of a rock feel than ... LP, Vinyl record album