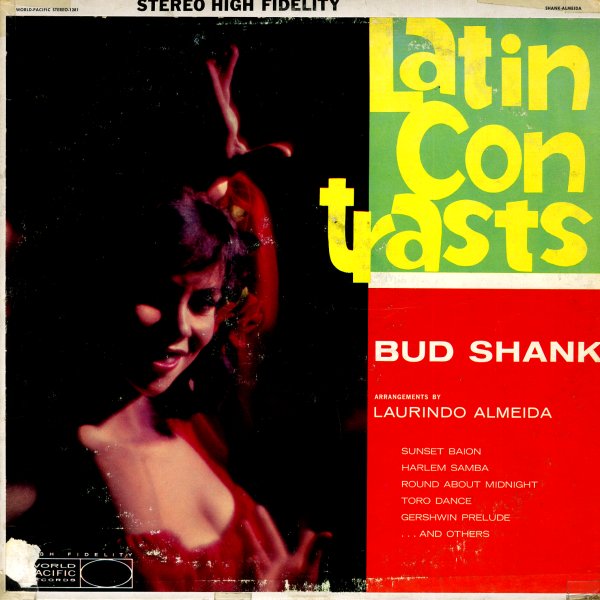 5 years after they made their first set of groundbreaking Braziliany jazz tracks together, Bud Shank and Laurindo Almeida went back into the studio to record another great batch for Pacific Jazz. That second set of sessions is captured here in its entirety, and it features Shank and Almeida playing with the looser rhythm team of Gary Peacock and Chuck Flores on a number of short groovy tracks that clearly had a big influence on the bossa generation. Titles include "Frio y Color", "Sunset Baion", "Harlem Samba", "Blowing Wild", "Xana-Lyn", and "Serenade For Alto".  © 1996-2021, Dusty Groove, Inc.
(Mono black label pressing with deep groove. Cover has a peeled spot from sticker removal at the top left corner.)

Mercy Mercy – Live At Caesars Palace
World Pacific, Late 60s. Very Good Gatefold
LP...$5.99
Buddy at his soulful late 60s best – not content to keep in the same groove as older years, and working here with a great lineup that includes some excellent younger players! Charles Owens is in the group on alto, and the set also features work by Don Menza on tenor, Art Pepper on alto, Pat ... LP, Vinyl record album

Best Of Billy Larkin & The Delegates
World Pacific, Mid 60s. Very Good
LP...$6.99
Monster groovers! This late 60s compilation brings together some of the best early work by organist Billy Larkin, and his amazing Delegates trio! Plus, some of the tracks feature some excellent sax work by the legendary Clifford Scott – best known to the world for his 50s work with Bill ... LP, Vinyl record album

Faces In Reflection
MPS, 1974. Very Good
LP...$8.99 (LP...$21.99)
Killer keyboards from the legendary George Duke – and one of his most righteous albums for the MPS label! The album's a spectacular set that showcases both sides of Duke's genius at the time – his spacey, soulful approach to a laidback tune – and his more jamming styles on the ... LP, Vinyl record album