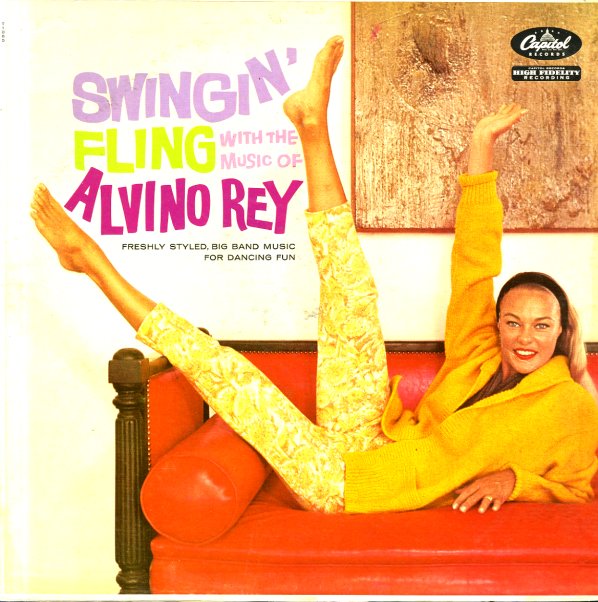 Alvino Rey's swinging "wow-wow" guitar sounds a lot like Esquivel's use of pedal steel, and this album's a great bunch of work in that vein, with swinging strident arrangements that mix the guitar and baritone sax solos. Great hip bachelor pad stuff  © 1996-2021, Dusty Groove, Inc.
(Mono rainbow label pressing. Cover has aging, a half split top seam, and light wear.)

That Lonely Feeling
Capitol, Late 50s. Near Mint-
LP...$14.99
One of the mellower albums from Alvino Rey – the amazing 50s pedal steel guitar (or console guitar) player who made some very cool records for Capitol! Although some of Rey's records for the label have the feel of Esquivel's best work, this one's a bit dreamier – still quite odd, and ... LP, Vinyl record album

Jackie Gleason Presents Oooo!
Capitol, Late 50s. Very Good
LP...$4.99
One of the greatest Jackie Gleason albums ever! The album has these warm lush orchestrations, with wordless vocals by "The Voices of Artie Malvin" wispily dreaming over it, hence the "Ooooo!" in the title. Tracks include "Thine Alone", "It's All Right With ... LP, Vinyl record album

La Chica De Ipanema (aka Quiet Nights & Brazilian Guitars)
Capitol (Mexico), Mid 60s. Very Good
LP...$8.99
An excellent concept for a bossa album from the 60s – a set that mixes together a bunch of different great guitarists – all with some light and lovely rhythm backings that really hit a groove! Jack Marshall put the set together – and in addition to his own guitar, the record ... LP, Vinyl record album

From Russia With Love Theme
Capitol, Mid 60s. Very Good
LP...$4.99
Jimmie's always been one of the overlooked greats of the arranging business – and he's got a hip style that we'd compare to that of Jack Nietzsche, another excellent LA arranger from the same generation. This set gives Jimmie some great material to work with – as it not only includes ... LP, Vinyl record album

Quiet Nights & Brazilian Guitars
Capitol, Mid 60s. Very Good
LP...$13.99
An excellent concept for a bossa album from the 60s – a set that mixes together a bunch of different great guitarists – all with some light and lovely rhythm backings that really hit a groove! Jack Marshall put the set together – and in addition to his own guitar, the record ... LP, Vinyl record album