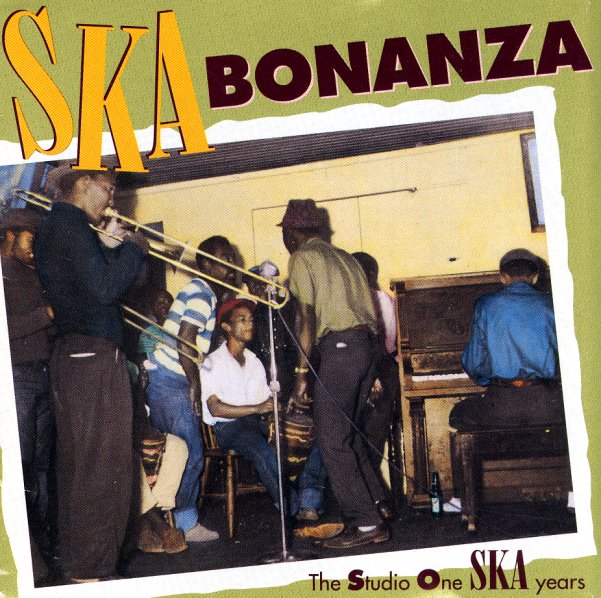 Bonanza is right! 41 blazing early Studio One tracks that will more than satisfy your ska jones from classic bedrock rhythms to lesser known but no less great numbers, all essential Coxsone Dodd, though! Includes "Nimble Foot Ska" by Roland Alphonso & The Skatalites, "Arte Bella" by Stranger Cole and Ken Boothe, "Streets Of Gold" and "Black Sunday" by the Skatalites, "Old Fowl Ska" and "Bongo Tango"by Roland Alphonso, "Always On Sunday" by Frank Anderson and Tommy McCook with the Skatalites, "Sugar Bag" by Lee King Perry, "Settle Down" by Lester Sterling, Johnnie Moore and Tommy McCook, "Turn Me On" by Ossie & The Upsetters, "Over The River" by the Jiving Juniors, "Du Du Wap" by Chuck & Dobby, "Man In The Street" by Don Drummond, "Simmer Down" by Bob Marley & The Wailers, "Shining Light" by toots & The Maytals, "Sit Down Servant" by Jackie Opel, River Jordan" by Clancy Eccles, "Jeanie Girl" by the Charmers and loads more!  © 1996-2020, Dusty Groove, Inc.
(Out of print.)