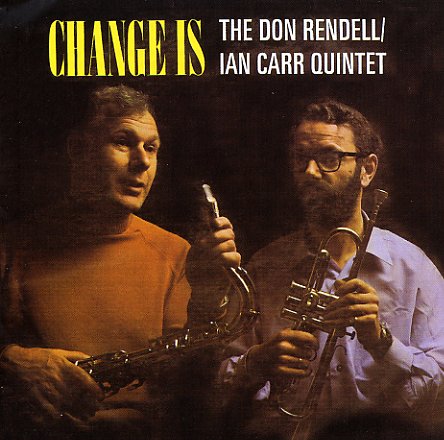 A fitting title – for a great album! Change Is marks a real turning point in the career of the Ian Carr/Don Rendell team – as the pair seem to go out even farther than before, leaving behind some of the straighter rhythms of earlier sets, to explore a realm of looser time and space. The ensemble still has a soulful undercurrent that keeps things compelling – even when the overall style gets a bit out – and thanks to strong horn work from the leaders, plus lyrical work on piano and harpsichord by Michael Garrick, the album's every bit as great as earlier classics like Dusk Fire or Shades of Blue. Garrick contributed 2 great tunes to the album – "Black Hair" and "Cold Mountain" – and other titles include "Elastic Dream", "One Green Eye", and "Mirage".  © 1996-2022, Dusty Groove, Inc.

Morning Star/Carnegie Hall/Chicago Theme
CTI/BGO (UK), 1973/1975. New Copy 2CD
CD...$8.99 20.99
A trio of CTI classics from reedman Hubert Laws! First up is Morning Star – one of the most sublime Hubert Laws albums for CTI – a set that features his incredibly soulful flute work floating over these beautiful large arrangements by Don Sebesky – all ticked by some sweet ... CD

Gleam
CBS/BGO (UK), 1975. New Copy 2CD
CD...$8.99 19.99
Jazz funk genius from Freddie Hubbard in the mid 70s! Gleam was a Japanese-only double album from the jazz giant in its original release – mighty funky at times, too – right up there with some of the best Miles Davis and Herbie Hancock Japanese sets from the 70s! It's a live set ... CD

All My Tomorrows/Soulful Strut/Breath Of Heaven
Columbia/BGO (UK), 1994/1996/1997. New Copy 3CDs
CD...$7.99 16.99
A trio of 90s albums from Grover Washington! All My Tomorrows is an overlooked gem from reedman Grover – recorded in his later years, but a set that's actually got more of an acoustic style overall – one that goes back to the roots farther than any of Grover's fusion records! ... CD